Otago endures 'one of those weekends' 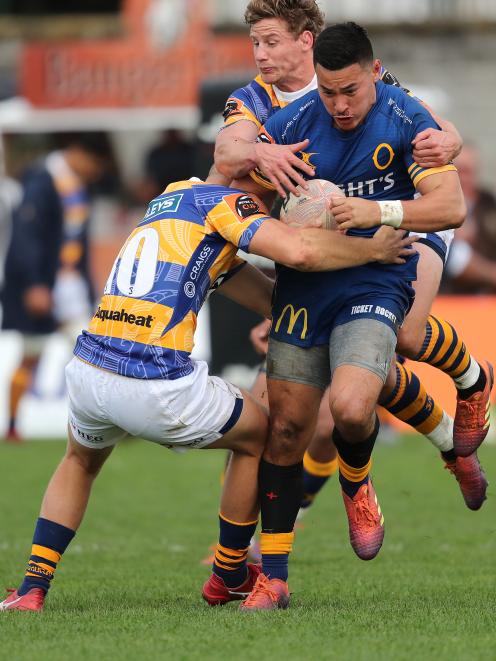 Otago midfield back Sio Tomkinson is tackled by Bay of Plenty first five-eighth Dan Hollinshead while halfback Richard Judd lends a hand in Tauranga yesterday.PHOTO: GETTY IMAGES
Every team has a stinker in them. Otago found it early this season.

The side made a very underwhelming start to the Mitre 10 Cup with a 50-7 loss to Bay of Plenty in Tauranga yesterday.

It was a forgettable performance from Otago as it struggled to get out of first gear and was too slow around the field. It lost the gain line to Bay of Plenty and could not get much going on attack.

It trailed 26-0 at halftime by which time Bay of Plenty had its four-try bonus point. It added another four tries in the second half as Otago conceded 50 points for the first time since losing to a Rieko Ioane-inspired Auckland in 2016.

Otago struggled to link and was put under pressure by a relentless Bay of Plenty defence. Its ball security could have been better. The paddock was heavy and Otago seemed to sink into it and could not get any speed into its game.

In contrast, Bay of Plenty was full of life and once it withstood an early attack from Otago it took over the game.

The home team had a massive ascendancy in the scrum in the opening half and grabbed four penalties from its dominance at set piece.

Otago coach Ben Herring said the side just did not front.

"It is hard to pinpoint an exact thing which went wrong. Bay of Plenty was playing with a whole lot of fizz and energy while we did not fire a shot," he said.

"It was just one of those weekends. I did not see it coming at all."

Herring said anyone would be hard-pressed to see the positives in the performance.

The Bay of Plenty scrum kept the side on the back foot in the first half and Otago had little ball to play with. It pressed in the opening minutes but came away with nothing, and that is how it went.

The home team had failed to make the playoffs last year but look much improved this season.

Otago scored its try halfway through the second half when second five-eighth Sio Tomkinson charged on to the ball
and went over.

First five-eighth Vilimoni Koroi was a mixed bag in his new position but he got little front-foot ball.

Winger Jona Nareki was ill and did not make the trip to Tauranga. Sale Halaleva replaced him and made his starting debut at this level for Otago on the wing, impressing with his work rate.