Otago not dwelling on Shield defence 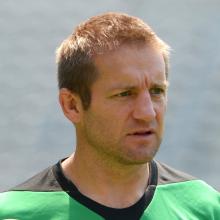 Ben Herring.
Otago does not have to look far for motivation today.

The side is just coming off a disappointing first-up performance in the Mitre 10 Cup, where it conceded 50 points against Bay of Plenty.

Then Southland comes to town and a win over the neighbour is always a good way to bolster spirits.

Most importantly, the Ranfurly Shield is on the line for Otago.

After winning it at the end of last season, and a couple of mandatory pre-season challenges, the last thing Otago needs to do is lose the log o' wood in its first serious defence.

Otago coach Ben Herring said there had been a temptation to make wholesale changes to the side after the loss last week.

But the coaching staff had decided against that and felt not a whole lot of changes were needed. The loss was not as bad as first thought after watching the tape.

"This week we will get our scrum right. We were going against a very experienced front row and that won't be the case this week, so we will make amends there," Herring said.

"There is a good attitude in the team. The guys were really disappointed with the effort last week and it wasn't a great start to our campaign. But we are looking forward.

"We have talked about the shield but we did not want to dwell on it. We don't want to hide from it ... but it will also be good to get home and play at home for the first time in four weeks."

Herring said returning captain Michael Collins would get some game time. Former All Black flanker Adam Thomson, after a couple of games for the Otago development team, is on the bench and is expected to get a run.

Otago needs to get some energy back in its team and put some continuity in its game. The side was too slow and on the back foot for too long in the match last week and cannot afford another performance like that.

There is some dash in the side with the likes of Taylor Haugh and Jona Nareki out the back. But up front is where the game is won and the Otago tight five needs to stamp its mark.

Hooker Sekonaia Pole will want to show his wares in getting a start, while locks Josh Dickson and Joe Latta will want to make improvements from last week.