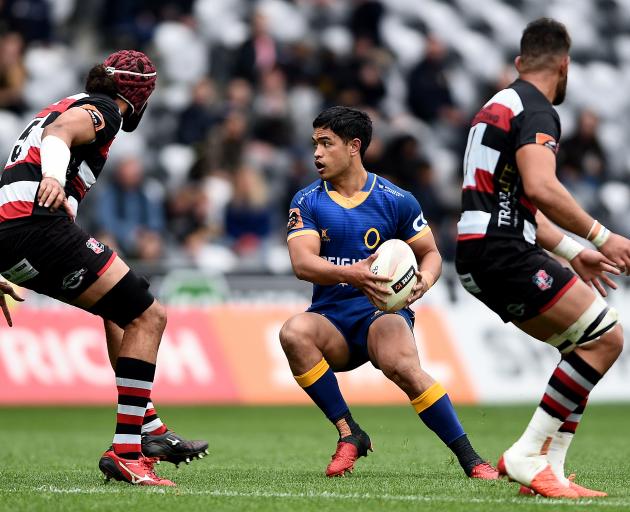 Otago will be without Josh Ioane. Photo: Getty Images
Key Otago backs Josh Ioane and Vilimoni Koroi have been dropped for tonight’s game against Northland for breaching team protocol.

The pair will attend the match but will not be stripped for the game. The Otago Daily Times understands they breached the team’s alcohol policy.

Otago coach Tom Donnelly said it was his decision to drop them and simply came down to the players failing to meet team standards.

He declined to say what the duo did and said the decision had been made and it was ‘‘time to move on’’.

Otago will now have to beat Northland without a couple of its most important players. Ioane is the starting first five-eighth while Koroi is a livewire out the back and is seen as the back-up in the No10 jersey behind Ioane.

Jono Hickey, who is usually a halfback, will start the match at first five-eighth while Michael Collins, who started at second five-eighth last week, has moved back to fullback.

Hickey was also selected as he is a goal kicker which Otago is lacking without Ioane and Koroi.

Matt Whaanga makes his first start of the season and he will team up in the midfield with Josh Timu.

Hickey is yet to start a game at first five-eighth for Otago but is a versatile player who has plenty of experience.

Harrison Boyle, who has played first five-eighth, will be in the reserves.

Giovanni Leituala has also been named in the reserves and is a chance to make his first-class debut should be get on the field.

The forward pack has just the one change with Jamie Mackintosh starting on the loosehead side of the scrum as George Bower is set to head to Australia with the All Blacks.

Northland has moved experienced halfback Sam Nock to the reserves’ bench, while it will be captain’s Jordan Olsen’s 50th game for the province.

Josh Goodhue and Tom Robinson provide the muscle for the Northland side. Highlanders outside back Scott Gregory will start at fullback for Northland while a Going, Kalani, is in the backline.

This is a crunch match for both teams with Otago first equal on the Mitre 10 Cup championship table on 20 points and Northland just behind in third on 18 points.

Brady Rush is the son of former national sevens captain Eric Rush, and will make his debut for Northland if he gets on the field.