Freedom Vahaakolo goes over to score his first try against Northland at Forsyth Barr Stadium last night. PHOTOS: PETER MCINTOSH
Too big and strong up front and too slick and professional out back.

Otago has got a foot in the Mitre 10 Cup championship playoffs after a dominant 30-7 win over Northland last night at Forsyth Barr Stadium.

Otago was never troubled against a woeful visiting side, which was well off the pace. The home side did the basics right and that was more than enough to finish well ahead of Northland.

It scored two tries in each half and the last one with three minutes to go clinched the all important bonus point. It was ahead 13-0 at the break.

Otago’s defence was strong and accurate and kept the men from up north on the back foot the whole game.

The home team had the majority of territory and possession and never let Northland settle into its game.

Northland just could not get anything going and had no respect for the ball.

Otago totally dominated the first half. It had plenty of ball and should have been further ahead.

Northland’s ball security was about as poor as Gerry Brownlee’s political future. The men from the Kauri country coughed the ball up seemingly at will.

It never created any pressure on Otago and the home side had no lengthy spells in defence as the Northland attack was very sloppy.

Otago did not stand back on defence and some hard hits by both forwards and backs meant Northland never won anything on the advantage line.

The Otago front row, which combined brings together 99 years, was strong in the set piece and got heavily involved in the breakdown.

Josh Dickson was again strong in the lineout while the loose forward trio got round the paddock. 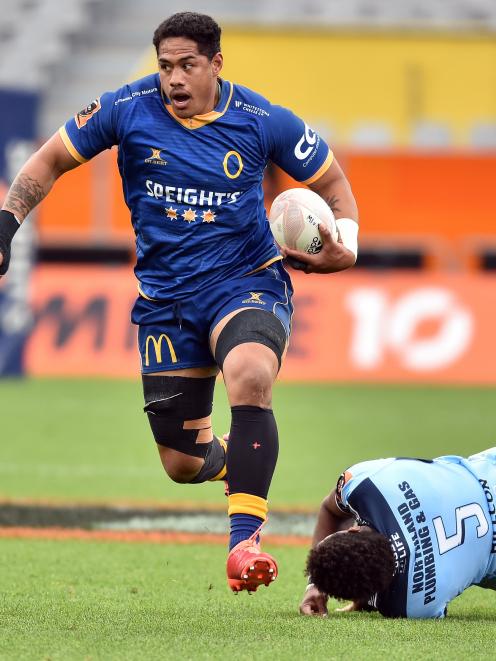 The side drove the ball up from a lineout about 20m and then cleared the ball out the backs. Jona Nareki made a well timed entry and broke the line. He threw a nice pass to Freedom Vahaakolo who scored in the corner.

Five minutes from halftime, Northland winger Pisi Leilua pulled out a clanger. He threw the ball into himself but it only travelled 2m. A free kick was awarded and Otago immediately steamed on to attack. The ball eventually went wide and Vahaakolo went over in the left hand corner this time.

Prop Josh Hohneck, who never scored a try for the Highlanders when he played for them, then got on the board early in the second half to extend the lead. Northland had one 10-minute period midway through the second half and scored a try through Rene Ranger. But good Otago defence stopped any momentum and replacement hooker Ricky Jackson scored the fourth try with three minutes left.

Apart from the forwards, who played well, winger Nareki was into everything and stamped his class while Matt Whaanga ran hard in his first start of the season.