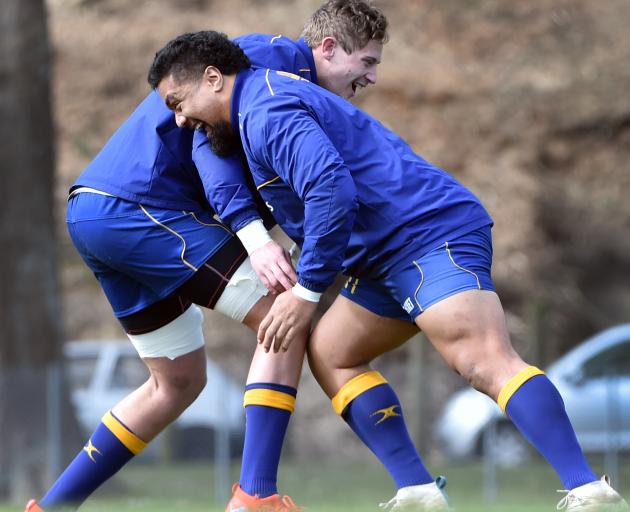 Otago prop Hisa Sasagi (right) thumps into team-mate Louis Conradie during a training session at Logan Park yesterday. Photo: Peter McIntosh
Hisa Sasagi made the tough decision to turn down an opportunity to play for Samoa at the World Cup.

The 32-year-old Otago tighthead prop is embracing an even bigger challenge instead.

Partner Nadia Oxby is expecting a child in two weeks and Sasagi has opted to remain in Dunedin to support her and play for Otago.

Family comes first and he was also able to reach a milestone which may have eluded him otherwise.

He brought up 50 games for his province during the successful Ranfurly Shield defence against Manawatu last week.

It was a great moment for the 125kg bookend.

''It was awesome, actually. I got to run out there with my 9-year-old son at the stadium,'' Sasagi said.

''And Mum and Dad were there to watch their first game under the roof.''

Sasagi hails from Samoa but moved to Dunedin with his family in 1995 when he was 8.

He started off his senior rugby with Alhambra-Union. But when son Jonty was born in 2010, he ''sort of'' hung up his boots.

However, he was lured back to play for Pirates and formed a formidable front row with the likes of former Otago and Highlanders prop Craig Millar.

''It was a scrum that never went back, so we were happy with that.''

''I'm not pointing any fingers,'' he laughed when asked if it was just the backs who let the side down.

When the Pirates premier side folded before the 2017 season, Sasagi joined Southern.

He had a stint with the Hurricanes in 2016 when the Wellington-based franchise won the Super Rugby tournament.

Sasagi had injury problems and did not get on the field, but he was part of the squad nonetheless.

He also had a stint with top English club Saracens as injury cover in 2018.

He was supposed to join the Asia Pacific Dragons in the Global Rapid Rugby competition this year but suffered an injury the day before leaving.

Injuries have been a bit of a theme during his career. The big fellow got injured on the way to his son's game.

He slipped down the bank at Bishopscourt and dislocated his shoulder.

It is not funny, really. But Sasagi can joke about it. That is how he is - always with a big smile on his face.

He seems way too nice to clatter into tacklers the way he does. But he does and with quite some force.

A strong ball carrier, Sasagi has made four appearances for Samoa.

He would have loved to have been part of Samoa's push for glory but ''cracking 50'' for Otago really meant a lot as well.

''If my partner was not pregnant I would have probably gone. But it is still an awesome achievement for me to get my 50.

''I rate it as just as good as getting to the World Cup.''

Otago's next assignment will be its toughest Ranfurly Shield defence yet. It is hosting Taranaki at Forsyth Barr Stadium on Sunday.

''We have been a seesaw team,'' Sasagi said, adding his side needed to start as well as it had been finishing games.