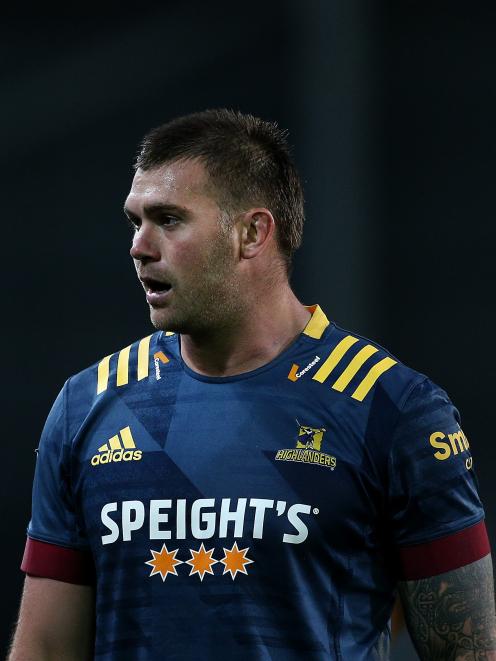 Liam Squire in action for the Highlanders. Photo: Getty Images.
The comeback for Liam Squire is over — for now.

Highlanders loose forward Liam Squire has been forced out of Super Rugby Aotearoa 2021 due to a recurrent knee injury.

Squire, who turned 30 this month, made two appearances off the bench for the Highlanders at the start of the competition.

He came on in the second half against the Crusaders in the opening game of the season, then a week later did the same thing against the Chiefs in Hamilton.

The following week he missed the game against the Blues and was not sighted in the 23-man squad to play the Hurricanes under the roof last Friday night.

All up, he would have played less than an hour.

It is very tough on Squire, who is coming off major surgeries on his knee and hip.

In a statement yesterday, the Highlanders said Squire had been hampered by his right knee injury and would now take time to rehabilitate his knee.

“It’s tough for Liam. He has worked hard to get back in shape to have a big season but his knee has flared up again which means we have to give him time now to rest it and try and get it right,’’ Brown said.

Squire had signed a two-year deal in Japan but cut that short after surgery to his knee and signed with the Highlanders for the next two seasons.

When he is fit and on the paddock, there are few as abrasive and dominant as Squire but his future would appear to be in doubt. He has missed as many games as he has played in the past half-dozen years.

There was talk of Squire getting back into the All Blacks but that appears to be premature, especially now with the injury.

When he will get on the paddock is still up in the air but he is determined to keep playing. A return to the national provincial championship may be an option.

No replacement has been named for Squire yet. The Highlanders have plenty of depth in their loose forwards.

Highlanders assistant coach Clarke Dermody said yesterday winger Jona Nareki was back running and it was hoped he would be available to play on Good Friday.

Nareki was a late withdrawal from last Friday night’s game, not recovering from a hip injury.

The Highlanders face a tough task this week, having to travel to Christchurch to take on the unbeaten Crusaders on Friday night.

The southern side will start the second round of the Super Rugby Aotearoa competition in last place, having won only one game out of the four it has played.

Dermody said there was no other serious injuries in the squad. Players were getting banged up but that was just the nature of the competition, which had a high intensity and was very physical.