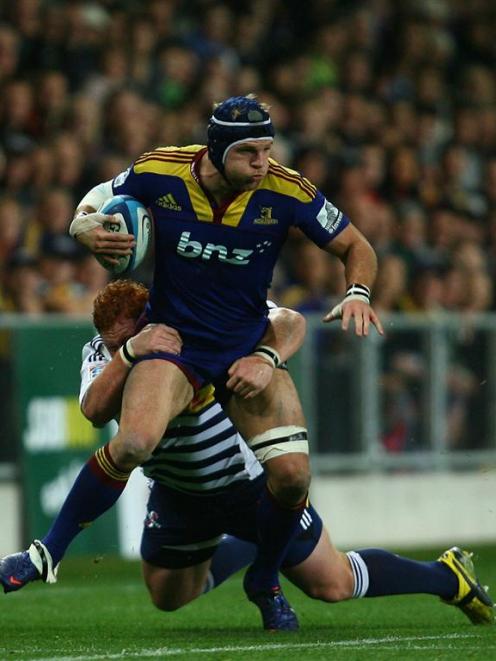 Highlanders flanker James Haskell is tackled. (Photo by Teaukura Moetaua/Getty Images)
They huffed and they puffed but the Stormers house just would not fold.

In a top of the table clash at Forsyth Barr Stadium tonight, the Highlanders fired plenty of ammunition, but the unbeaten Stormers refused to budge, running out 21-6 winners.

The loss was the Highlanders' second of the season and the first at the new covered stadium.

The Stormers lost out in the territory and possession stakes but it did not matter as no-one could get past their wall of defenders.

The South Africans were masters at gang tackling and just never let the Highlanders through their line.

They spread right across the field and never missed a tackle.

This side is going to take some beating, and appear to have gone up a notch from last year.

The home side did not help its cause with some sloppy handling and playing too much of the ball behind the advantage line.

The Stormers also threw in some cynical play in the second half and hooker Tiaan Liebenberg spent 10 minutes in the bin near the end for a stray hand in a ruck.

But it did not matter as the Highlanders could have played until midnight and still not scored.

The Highlanders came out with a wet sail on and the Stormers dominated the first 20 minutes.

Joe Pietersen knocked over a early penalty and then winger Gio Aplon used his blinding pace to chase a kick through after the Highlanders had mucked up an inside ball.

But the home team got their hands on the ball in the middle stages of the half and gradually won some territory.

Chris Noakes slotted a penalty but then missed a couple of easy chances as the Stormers looked rock solid on defence.

That defence went to sublime attack with fullback Pietersen starting and finishing a 70m try which left the home side stunned.

Noakes knocked over a penalty right on the break to get some return for the home side's attack.

Best for the Stormers were skipper Jean de Villiers, and lock Andries Bekker.

Best for the Highlanders were flanker James Haskell and centre Tamati Ellison.