Rugby: Is Joseph off to Japan? 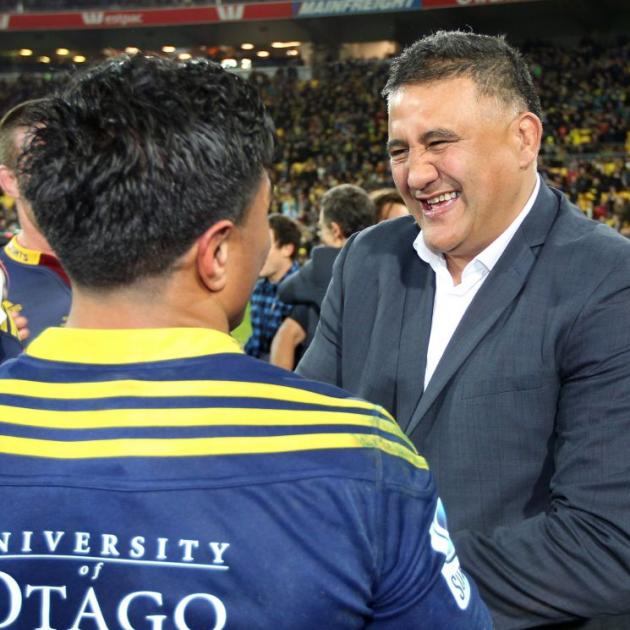 Former All Black Jamie Joseph is reportedly being lined up to succeed Eddie Jones as Japan's national coach for the next four seasons, while another ex-All Black Mark Hammett is favoured to coach the Japanese Sunwolves in their first foray into Super Rugby.

National Japanese dailies report that negotiations with Hammett are in the late stages with an official announcement about the Sunwolves' playing roster and some staff expected on Monday.

The media are also saying the Japan Rugby Union have picked Joseph from a shortlist of five contenders to coach the national side with negotiations now under way with Joseph and the Highlanders about him continuing to coach the Super Rugby champions.

Attempts to reach Joseph and Hammett to discuss their rugby coaching futures were unsuccessful.

Hammett moved from the Hurricanes to be director of rugby at Cardiff in 2014 but the club agreed to release him six months into his three-year deal for personal reasons. He has been appointed assistant coach of the Tasman Makos provincial side next year.

Joseph cut his coaching teeth with Wellington and the Maori All Blacks before being appointed Highlanders coach in 2011. There were rocky periods and murmurs about player unhappiness which turned around last season when the Highlanders won their first Super Rugby crown.

Japan have been on the lookout for some time for coaches to lead the Sunwolves and the national side. Former Crusaders and Wallabies coach Robbie Deans was a strong tip but has reiterated his only interest is coaching the Panasonic Wild Knights. Fiji coach John McKee has also apparently rebuffed an approach to head up the Sunwolves.

Indications Japan may have a solution for their Super Rugby coaching vacancy will ease a little of Sanzar's anxiety about the new entrants in next year's competition.

Argentina have been in training for some time and reports suggest they are well organised but the Sunwolves and Kings in South Africa have struggled to get much traction.

New Zealand Rugby chief executive Steve Tew says it's crucial the Sunwolves coach is announced soon for credibility of the team and the expanded 18-team competition.

"The biggest worry is that they are yet to appoint a coach," he said. "That's the most pressing problem and we're told that it will be resolved before Christmas. Clearly that's already too late."

When the Sunwolves were chosen for the new Super series format, Jones was going to be their rugby director but he left to take up head coaching roles with the Stormers then England.

The Kings seem to have lurched through a series of dramas about player payments, erratic recruitment, coaching troubles and issues which have forced the national union to take over running the franchise.

Tew said he was encouraged by talk of an improved player roster in Japan, a strong commercial programme and ground facilities.

"The Japanese are working very hard to get up to speed and my South African colleagues continue to assure me that the Kings will be fine."

- By Wynne Gray of the New Zealand Herald