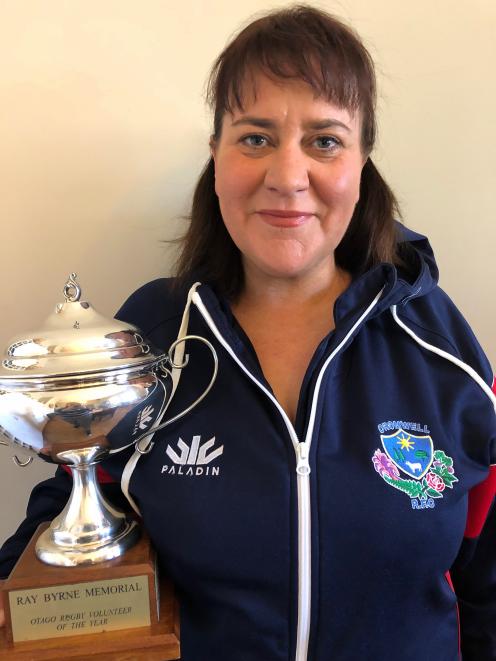 Cromwell rugby stalwart Paula Clark and her volunteer of the year award. PHOTO: SUPPLIED
Her father-in-law was an All Black. Her husband played and coaches the game. She has three daughters who all wanted to play with the oval ball.

So it is hardly a surprise that Paula Clark got involved in rugby.

But she has got more than involved. She has been the driving force behind the Cromwell College girls' rugby side for the best part of a decade. She also lends a hand at the Cromwell Rugby Club, helps in all departments at the club's facilities at Anderson Park and became a committee member of the club this year.

Clark (46) picked up the award for volunteer of the year at this week's Otago Rugby Awards, though it was her daughter, Tia, who accepted the award on her behalf.

Clark was busy on the family farm and had other things to do.

She has coached the girls' rugby team at Cromwell College for nine years, which runs under the umbrella of the Cromwell club.

"We have always been there playing and we just had to use leftover jerseys. But this year we got a whole new set of jerseys. That was good as we are not 130kg props," she said.

The side played against girls' teams from Mount Aspiring College, Dunstan High School and Wakatipu High School on Wednesday afternoons in the second term.

"We can't play during the weekend as too many of the girls have other sports on. But we get out there when there is frost on the ground - it's freezing cold, but the girls are tough. We're not like the men who wait until 3pm to play, when it is nice and sunny in the afternoon.

"I have always enjoyed working with the girls. Many of them have never touched a rugby ball in their life. They are terrified and have usually had to twist mum and dad's arm to play. But once they play that first game they love it for life.

"It's really a man's world but they can get out there and get a few bruises ... and they love the camaraderie that rugby brings.

"It's great seeing the girls grow. I had three daughters and they all wanted to play and they are still playing."

Two of them, Tia and Della, have left school and are in Dunedin, playing for Alhambra-Union, while youngest daughter Kelsey has one year left at school.

The girls she had coached have spread far and wide.

"We have girls playing in Germany, in Austria, all round the country, some playing up in the Northland team. They aren't Black Ferns but they are still playing for their clubs, and enjoying it."

Her father-in-law was Don Clark, a loose forward who played for the All Blacks in the 1960s. Her husband, Jason, is heavily involved in the Cromwell club.

She said she was leaving all the talking at the committee to the men after her first year. She was surprised to get the award as she just did the job to help out.

With her youngest daughter into her final year of school next year, she was looking at someone else to take over the team.

Vast rugby knowledge was not a major requirement as it was more about managing a group of busy teenage girls.