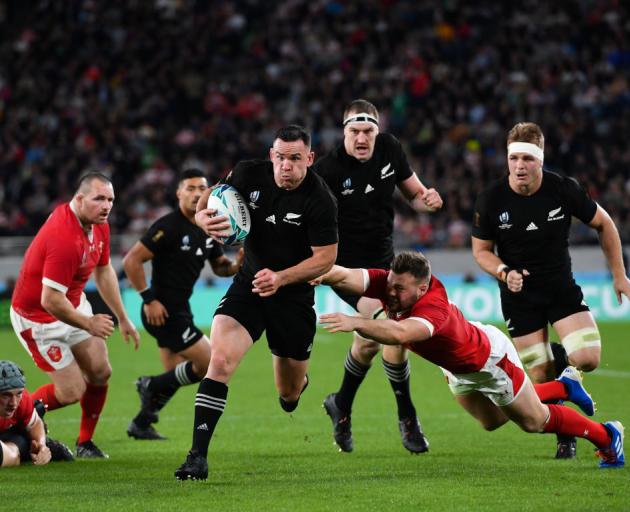 All Black Ryan Crotty evades the tackle of Wales' Owen Lane to score a try during the bronze final match. Photo: Getty Images
The cup is over.

It is the end of the 2019 Rugby World Cup and Spark appears to have left the main stage. But it still wants to be a major player. No longer wants to be in the supporting actor category.

It wants to be on Broadway, seen as the real deal.

But can it do it?

Can Spark Sport become a legitimate broadcaster of sport in this country? And is there the appetite for it?

Streaming is the way of the future we have all been told and watching network television is a thing of the past. Watching games on devices is the new mode.

Spark pumped out a press release yesterday about its success with the World Cup coverage and as expected it was all great they said.

It created milestones and when the issues became too great the Spark people got out and about to help.

Spark Sport was available on 11 different devices and most people used at least two devices to watch games.

The telecommunications company offered another month of coverage on Spark Sport for those who bought the tournament pass.

So handshakes all round. Job well done.

Onward we plough into new territory.

So did Spark do a good job?

It was never going to be perfect as it was done by a combination of humans and computers and that is a dangerous mix. How often does a power point presentation work straight away? Ever pushed the right button straight away to get the device powered up? Technology is reliably unreliable.

The expectation from some people was way too high and those in rural areas did it tough. Many, including yours truly, had no issues. The screen was clear the entire time, the commentary was fine and there was no static or lagging.

One thing was once you were on to the World Cup that was it. It was too much of a risk to channel surf. To hop back to Sky to check the league or the Mitre 10 Cup. Too dicey as we had heard the horror stories.

That was a pain.

The biggest question around streaming is whether NZ is big enough to support multiple sport channels.

Are there enough cricket fans out there to pay for cricket coverage? Watch the Black Caps take on Sri Lanka in a one dayer in November?

Spark never said whether it made a profit out of the coverage. It got 200,000 subscribers but is that a lot in a country of nearly 5 million?

Lots of people like to stream. But not a lot of them like to pay for it.

• Steve Hepburn signed up for a World Cup tournament pass early on and in a series has given his thoughts on the coverage.