By Steve Hepburn
0 Comments
King's High School powered its way to a historic 28-16 victory over Otago Boys’ High School on Saturday, showing it has the ability to go all the way in the Otago Premier Schools competition this season.

King’s led 17-16 at the break and dominated territory in the second half to — in the end — run out comfortable winners in the match, played on a sticky Littlebourne.

It was the first win by King’s at Littlebourne since 1999 and ended a long run of victories in the competition for the home team and defending champion. King’s last beat Otago Boys’ High School in 2007. 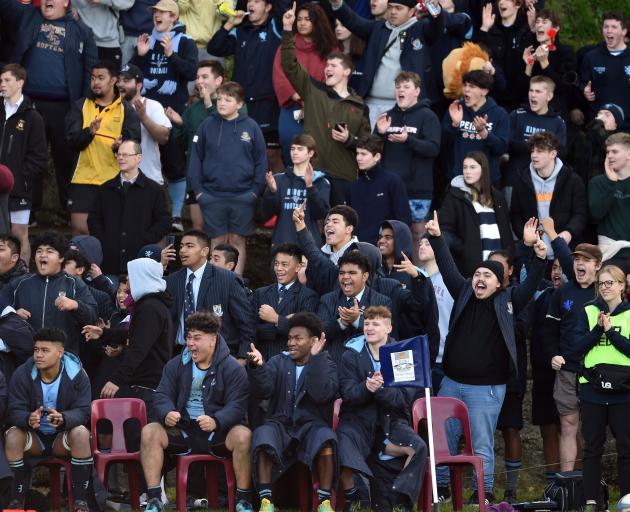 King’s supporters celebrate as their team beats Otago Boys’ for the first time since 2007.
The host team started well and led 6-0 in as many minutes. But King’s slowly got into its work.

It was more than solid in the scrum and gave the Otago Boys’ backs little room to move.

The visiting side pulled further ahead in the second half with a couple of penalties. But the decisive play came with about 15 minutes remaining.

King’s won a lineout 20m from the home team’s tryline and started to maul the ball up.

It could not be stopped and flanker Keanu Vanis, son of former All Black Kupu Vanisi, was part of the maul which went over to score the try. 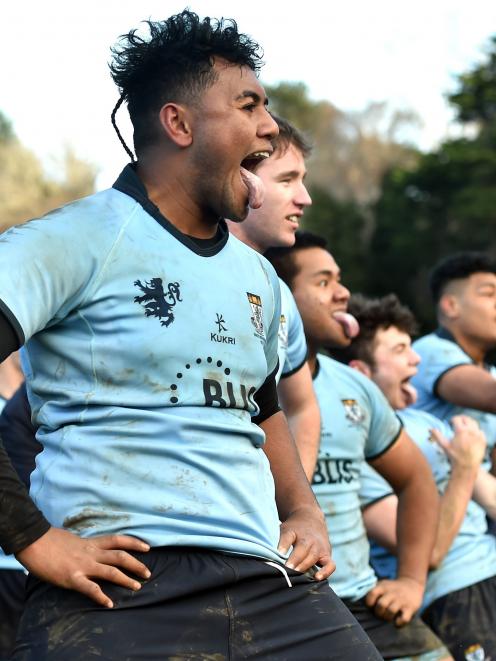 King’s High School first XV player Ne’emia Vaiangina leads a haka after his side beat Otago Boys’ High School at Littlebourne on Saturday. PHOTOS: PETER MCINTOSH
Otago Boys’ tried to get back into the game but the King’s defence was too well organised.

Otago Boys’ was stuck under its posts for too long in the dying minutes as King’s won the battle for territory.

It was a total team effort from King’s but prop and skipper Rohan Wingham worked hard as did lock Koal Kirkman. Taine Hand did some tidy work at halfback and Ryan Watterson slotted the kicks.

Otago Boys’ tried hard but it had little opportunity to get in the right part of the field and put anything together on attack.

No 8 Semisi Taieloa Tupou and blindside flanker Oliver Haig were the best for the home side.

The two sides will meet again at King’s in the second round, which will be the traditional interschool match, in the third term.