Lopsided scores cause some concern in schools' competition 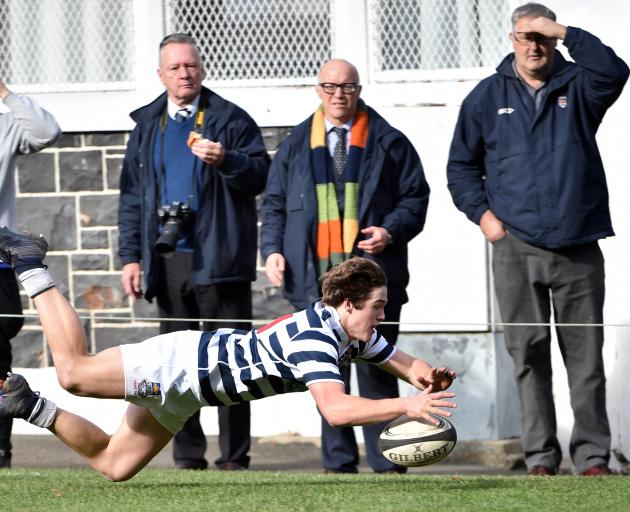 Otago Boys' High School First XV winger Michael Manson scores against King's High School's First XV after chasing a kick at Littlebourne. Photo: Peter McIntosh
Even the coach of the most dominant team in the competition is a little worried by the weekend's lopsided scores in the Otago premier school competition.

That scoreline will raise a few eyebrows.

Last year the two teams were evenly matched. They met in the final and Otago Boys' scored late to clinch a dramatic 24-17 win.

But on Saturday there was just one team in the contest. Otago Boys' dominated every facet of the game. Earlier in the week it beat King's High School 44-0.

That got people talking, as well.

Coach Regan Turoa said his side wanted to make a statement and it certainly achieved that.

But the burning question becomes - is the team too good for the grade? The school is in its second year back after taking four years out to play in the colts grade.

Last year the bigger single-sex schools, like King's and McGlashan, pushed Otago Boys'. Not so this year.

"It is probably still a bit too early to answer that," Turoa responded when asked whether his team was playing in the right competition.

"We've got Southland Boys' on Wednesday and that will be a different level of competition again.

"It is a good question."

Southland Boys' High School is making its return this year after five years out and smashed St Kevin's College 90-3 in Oamaru.

Turoa accepted one-sided encounters were not in the best interest of either side.

So far his team has scored 165 points, while conceding just seven in three games. Ideally, the tournament would be more even.

"Those teams will close the gap. I know that. But more than anything, I think it highlights the work we have done in the off-season.

"We've done a lot of work on the areas we needed to from last year and we've tidied up some of the things we were weak at.

"It has showed in the last two games what we can do."

There were some even matches at the weekend.