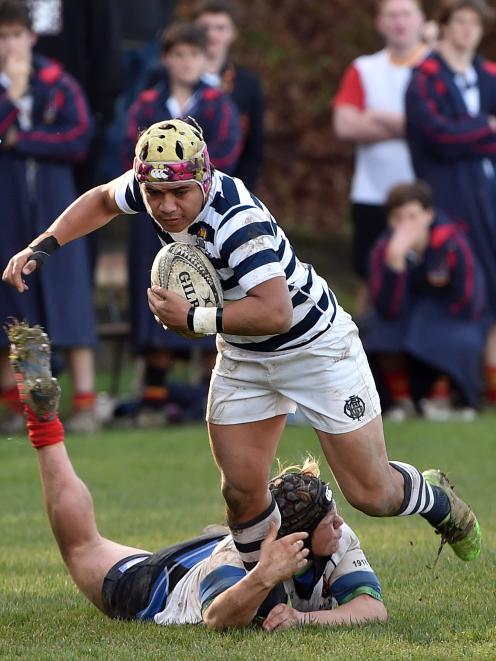 The oil: A couple of other schools are catching up and Southland Boys' will be tough, but OBs shapes as the team to beat. Pivot Tevita Asi is in his fourth year with the team and that experience will be key. No8 Taylor Dale is a formidable physical presence and quality lineout forward, while winger Michael Manson is rapid and knows his way to the line.

The oil: Book the side in for a top-four spot. Beat Christ College 15-12 last month and has a large contingent returning from last season. No8 Leroy Ferguson will set the tone with his heavy work rate. Hooker George Bell is another to watch. He is never far from the action, and first five-eighth Andrew McKenzie is an elusive runner with a quality tactical kicking game.

Coach: Ryan Bambry and Will Henry

The oil: Always a major threat but with 19 returning players King's will be formidable. The team has experienced players in key roles as well. Halfback Nathan Hastie is brilliant at driving the game plan and his core skills are impeccable. Powerful No8 Izaak Parata is a strong ball carrier with all the skills of an outside back, and midfielder Giovanni Leituala is one of the best defenders in the competition. He also has sharp footwork and is a reliable goal-kicker.

The oil: Fitness is good and the structure is in place. But how the team will go against some of the stronger teams is all a bit unknown. Kace O'Neill is a busy and reliable halfback. Loose forward Reuben Kerr has a high work rate, and No10 Matt Johnson will provide solid direction.

The oil: Just seven returning players so there has been quite a turnover. It is not a big team either. But hard-working openside Jacob Pledger is a tigerish defender and lock-cum-loose forward Oliver Kinzett is a quality lineout jumper and skilful player. It is their third year in the team and the side will look to them for inspiration.

The oil: The goal is to compete with the other co-ed schools. The side has 10 players back from last year, so there is a reasonable core to work with. Lock and co-captain Hamish Robinson is a promising player with good height and plenty of ability. First five-eighth Milane Martinovich is a good kicker and runner, and centre Jack East has raw pace and is a strong defender.

The oil: Solid middle-four team capable of the odd upset. Loosie Mitchell Sims is a quality ball fetcher and defender. He will team up with captain Ben Hill in the loose. Hill is a robust carrier and winger John Hoskin has speed and agility.

The oil: Stronger side than the past couple of years but the middle four is realistically the best it could hope for. Loosehead Tupou Fifita is a strong ball runner with a big engine. His cousin, Paea Fifita, is a talented loose forward with deceptive pace, and Jerome Misiloi will captain the side from centre. He is the younger brother of Otago forward Sione Misiloi and is a hard tackler.

The oil: Got hammered by King's in the pre-season and has a lot of work to do. But captain and No8 Caiden Davidson will lead that effort. Loosehead prop Glyn Lawrence will give the side some size up front, and centre Frank Hill is a solid defender and has fast feet.

Last year: Not in the competition

The oil: Taieri College and Kavanagh College have joined forces with Kaikorai Valley College in a bid to form a competitive team in a league in which co-educational schools have struggled. Lost all three pre-season games but ever hopeful with more time together the team can find its rhythm and make the middle-four section.

The oil: Going to be a tough season for the newbie while it gets up to speed. Halfback Angus Herron has a good boot and is a dangerous runner. Loose forward Litogi Isamaeli will batter the ball up and fellow loosie Alesana Tulafono has a tremendous work rate and is hard to tackle as well.

The oil: At the disadvantage of having to play most of its games away from home, but still very likely to feature at the business end. Harry Taylor will lead the team from the side of the scrum. He is a physical player and good thinker. No8 Arese Poliko carries well and does not miss many tackles, while Ryan Taylor is a quality first five-eighth with great distribution skills.