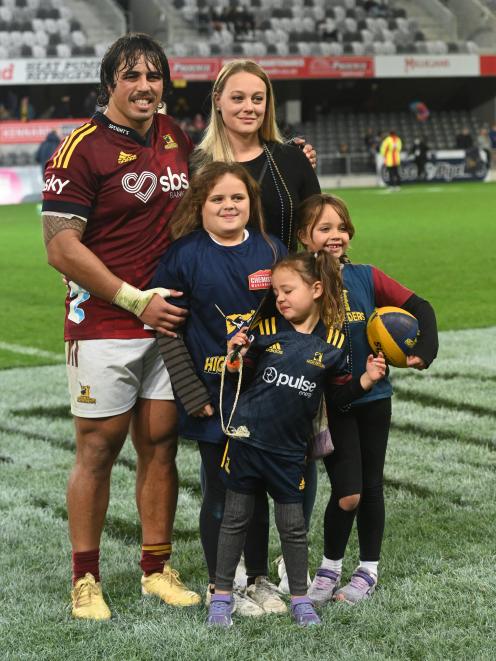 A kick to the corner, a tidy lineout, a well-worked build-up and the use of space out to the right allowed the hooker to give the Highlanders the lead in the second minute of the game.

It was something the team was seemingly incapable of last time it took to Forsyth Barr Stadium.

Certainly, the Force may not be the same quality of opponent as the Blues or Crusaders.

But this is a very different Highlanders team to the one that left for its road trip a month ago.

Makalio’s try turned out to be a precursor of what would unfold — and it really was that easy.

By the time Marino Mikaele-Tu’u crossed for his second, striding over off the back of a scrum in the 22nd minute, the Highlanders led 28-5.

That opening quarter, in which the team played open and free-flowing rugby, laid the platform for a 61-10 win last night.

It was their third win in a row, crucially opening a gap from the Force in the race for the eighth and final playoff spot.

"I think tonight every player on the park stepped up and executed their role really well," Highlanders coach Tony Brown said.

"When you’re doing that as a rugby team and you’re scoring tries, I couldn’t be prouder of the start we had."

It was a display of a team full of confidence.

Brown said that was a product of the team’s growth over the past month.

"Our team’s grown as a team, the leadership’s grown as well. The players just want to play well and win games of rugby.

Makalio’s opener was followed up four minutes later, as nice ball from experimental first five Sam Gilbert, who had a solid outing in his first match in the No10 jersey, put Mikaele-Tu’u into space.

The Force scrambled, but Mikaele-Tu’u crashed over moments later and Gilbert converted from the sideline to make it 14-0.

Some shabby defence let the Force respond through lock Jeremy Thrush, before Thomas Umaga-Jensen broke through the middle of a ruck and linked with Scott Gregory, who scored a third for the hosts.

Mikaele-Tu’u scored the fourth not long after and a rout appeared on.

However, Highlanders lock Josh Dickson was yellow-carded for a high tackle, his third card in as many appearances for that offence, and the Force used their numbers to hit straight back.

Makalio scored a second just after the break, perhaps the final blow to the Force, as the Highlanders ran away unchallenged.

The Highlanders scored a further four tries as the Force found itself reduced to 13 men late in the game after two high shots.

Alongside Gilbert’s display at first five, Mikaele-Tu’u had a strong game, while Billy Harmon was everywhere and Umaga-Jensen was a constant threat in the midfield.