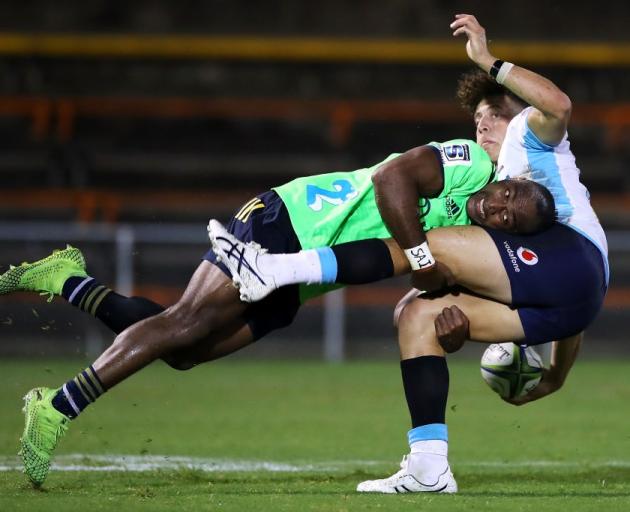 Chris Kuridrani tackles Mark Nawaqanitawase during the Highlanders' trial game against the Waratahs on Friday night. Photo: Getty Images
Teams will not be penalised on the field under a new trial law concerning tackles in the Super Rugby competition.

World Rugby introduced new rules last week to trial in various competitions around the world as it looks to review the way the game is played.

The trial laws are traditionally locked in for the year after the World Cup and then analysed to see which ones are successful.

The trial, to be used in Super Rugby which starts next week, is the high-tackle technique warning.

Preventing high dangerous tackles is a priority for World Rugby as studies have shown that many concussions come from the high tackles.

As part of the trial, Sanzaar will appoint a tackle technique review officer.

In a statement released yesterday, Sanzaar said research had shown the majority of concussions were caused by tacklers who tackle with an upright body.

Sanzaar was focused on implementing a process which identified high-risk upright tackles.

The trial will involve the review officer looking at all tackles each round and identifying tackles in which the tackler was in an upright body position.

If it is ruled the tackler has shown poor technique in executing an upright tackle, a warning may be sent to the player and player's coach. There will be no sanctions imposed on the player.

The process aims to educate players and coaches of high-risk behaviours by identifying poor tackle techniques and seeking to inform players of better choices the players can make in the tackle zone.

The player will not be penalised in any way but, through the warning system, it is hoped to shine a light on poor technique which has been shown to increase the risk of significant injury.

The process does not have any warnings as such but is going down the path of attempting to impact behavioural change via education and identification.

Referees can still rule on bad tackles on the field.

Meanwhile, Sanzaar has announced its refereeing team for the coming season.

Glen Jackson is retiring in March while Nick Briant has not been selected. The squad has been reduced to 12 referees from 15. South African Egon Seconds is the other referee to drop out of last year’s squad.