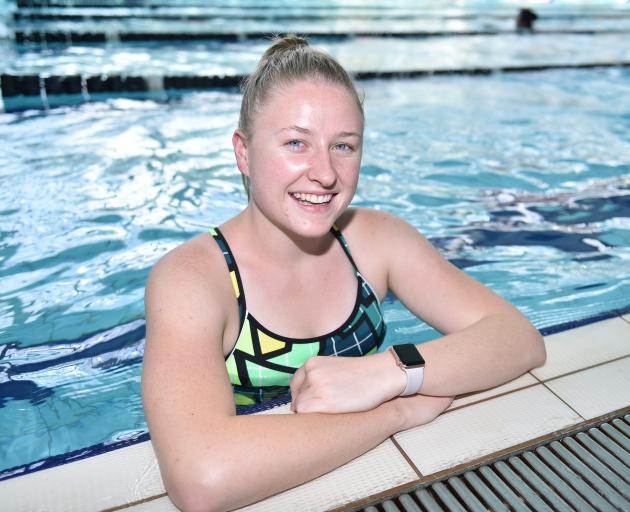 The 21-year-old did not want to lose her love of swimming.

So she stepped away from the sport competitively as a teenager, like so many others.

Unlike many of those others, she has continued to swim recreationally from once to three times a week.

Tomorrow, she will return to competitive action for the first time.

The University of Otago student will swim in the 50m, 100m and 200m breaststroke, as well as the 100m and 200m individual medley at Moana Pool in the Masters Games.

She will compete in the youngest age group — the 20-24 grade.

While that may seem very young for a masters competition, there are few swimmers who carry on beyond the teenage years.

For Gane it was a case of the training becoming too much, a few health issues and study beginning to factor more heavily.

‘‘My parents always said if my heart wasn’t fully into it then step back,’’ she said.

‘‘Just so I don’t ever hate it, so I can always go back and enjoy it whenever I go back.

She did not think she would still be swimming if she had kept going.

That had meant walking away from a successful junior career.

Gane won national titles in the breaststroke from ages 10 through to 15 while growing up in Blenheim.

She competed at the national championships at open level, as well as going to Australia to swim.

Now, as well as studying to be a primary school teacher, she is also helping the next generation.

She trained to become a swim instructor and has run breaststroke clinics for younger swimmers.

That seemed to ignite a spark that never went away.

‘‘I thought ‘Why not jump back in, do some swimming with them?’

‘‘So I went to competitions last weekend and the weekend before. It was a bit of fun.

‘‘They all thought it was hilarious that someone so much older than them was swimming with them.’’

Her expectations are not too high this week.

However, she did admit to having her eye on some of the breaststroke records.

‘‘If I break them that’d be incredible, but just a bit of fun really.’’