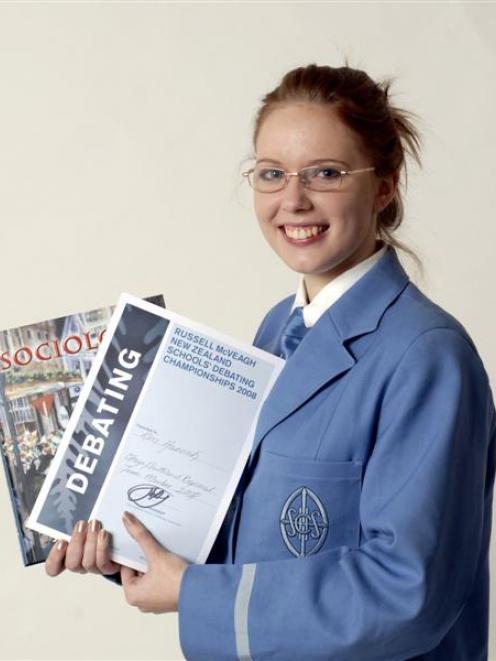 Kimberly Hannah
"I realised when I was very young that when I got into trouble, the truth could be used for diplomatic purposes. I learnt to weigh things up, suss out situations and evaluate the best course of action. In short, I learnt how to find the best argument.''

So it should come as no surprise that St Hildas Collegiate School pupil Kimberly Hannah (17) is a skilled debater.

‘‘Discussions'' around the dinner table were often impassioned, but they developed Kimberly's skills to the point where she has become a member of the Otago debating team (2007-08) which has represented the region at the New Zealand Secondary Schools Debating competition, winner of the St Hildas debating shield for the past five years, and coach of the school's junior debating team.

Her ability to spin a finely crafted argument is augmented by her strong academic background.

Kimberly won an outstanding scholarship in the Scholarship English exam last year, she was first in class in 2007 and 2008, gained academic Blues and NCEA level 1 and 2 endorsed with excellence.

She has also completed first-year history and politics papers at the University of Otago this year.

Kimberly hopes to blend her aptitudes in debating and academia with her passions for politics and law.

Eventually, the pros and cons of both will become clear and Kimberly will forge a career out of one.

Until then, the mental debate over which one will rage on.

Role model: ‘‘My future self-I have an image of myself in the future as a successful person, and that's what I'm working towards.''

Hopes for the future: To study law and politics.