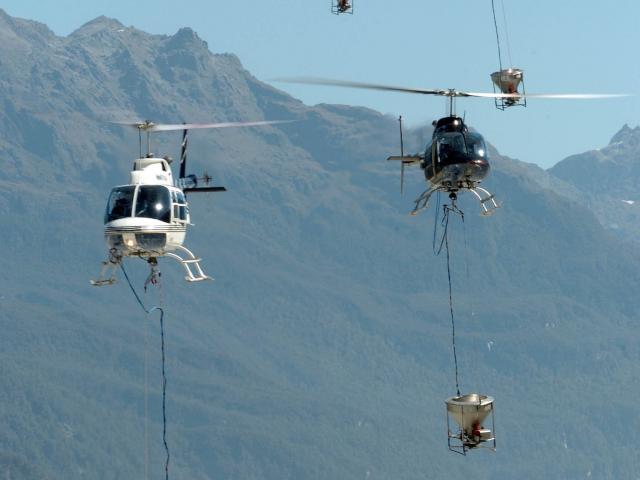 The West Coast Regional Council says its investment in a 1080 poison factory in Canterbury is a sound one that will deliver increasing returns as the government ramps up its efforts to eradicate...

The Department of Conservation will increase its 1080 coverage sevenfold this spring to fight an oncoming plague of rats, mice and stoats.
Otago might have one of the highest numbers of aerial 1080 operations in New Zealand but it also has one of the lowest rates of applying the poison.

A 1080 poisoning programme may be needed in Otago's beech forests next year to protect endangered species from a potential pest plague, Doc says.

Anti-1080-poisoning graffiti is obvious, chalked on the riser surfaces of paved steps in Dunedin's Octagon.

A recent aerial 1080 operation in the Silver Peaks area has had several benefits - not only have rat and possum populations been knocked to zero but researchers have had a chance to study the impact of 1080 on the resident South Island robin population.

A disappointed Department of Conservation has reported the deaths of seven keas following a recent 1080 pest control operation on the West Coast that was designed to prevent the birds eating poison baits.
A possum control programme in the Silver Peaks, north of Dunedin, is dependent on the vagaries of the weather.

It is time for the Dunedin City Council to have a "grown-up conversation" with residents about whether 1080 should continue to be used on council-owned land, Cr Fliss Butcher says.

The Parliamentary Commissioner for the Environment, Jan Wright, is no friend of the establishment. She made herself unpopular with the Government in her vocal opposition to mining of the conservation estate; she has raised the red flag over Solid Energy's plans for lignite extraction; she opposed the former Labour-led government's policies on biofuels.

Numbers of the nationally endangered mohua in the Catlins are continuing to stabilise, more than a year on from a poisoning programme to reduce predators.
Alternatives to 1080 pest control are in the pipeline but none directly targets the control of rabbits.
A public discussion on the aerial use of 1080 in Dunedin does not appear to be about to start soon - through the Dunedin City Council, at least.
The Otago Regional Council has little choice in using 1080 to control rabbits, maintains Peter Preston.

The future of aerial 1080 use in Dunedin needed to be "dispassionately" discussed, city councillor Fliss Butcher said yesterday.

At an Otago Regional Council compliance committee meeting about rabbits, Cr Duncan Butcher was quoted (ODT 30.1.10) as saying, "If we lose 1080, we're shot." I believe this is the type...

It will be a sad day for the birds and bush of New Zealand if 1080 use is banned or severely restricted before a practical alternative is found.
Department of Conservation (DOC) staff are still trying to establish whether or not about 30 small green pellets left outside the West Coast conservancy office in Hokitika early yesterday are 1080 poison.
Labour list MP Damien O'Connor today joined a growing chorus of high-profile people questioning the continued use of aerial 1080 poison on the West Coast.
A 50,000kg aerial drop of 1080 poisoned bait has been approved for part of Fiordland National Park this winter.