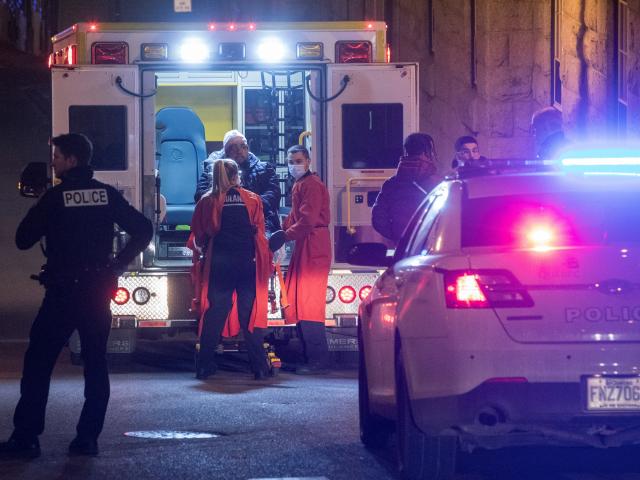 Two people were killed and five wounded after being stabbed by a man dressed in medieval clothes and wielding a sword, Quebec police said on Sunday.

A Dunedin ticketing firm's troubles have stretched to Canada and a council there is offering out-of-pocket customers compensation.

Canada on Wednesday honoured six members of its armed forces killed last week in a helicopter crash in a ceremony where the prime minister and military officials donned black cloth masks and...

The two Canadian teenagers who shot dead three people on a murderous highway rampage in Canada hoped to hijack a boat and sail to Africa or Europe to elude authorities.

Canadian authorities hunting the two teen fugitives suspected of killing Australian Lucas Fowler and his US girlfriend Chynna Deese are tight-lipped after a dive team ended a two-day search of a river in northern Manitoba.

Canadian police were using drones and dogs to scour harsh terrain in northern Manitoba in the search for two teens wanted in the killings of three people, including an American woman and her Australian boyfriend.

Canadian police are "exploring the possibility" that the teenage accused killers Kam McLeod and Bryer Schmegelsky may have fled the small town of Gillam, Manitoba, with the help of a third person.

In a dramatic twist, two Canadian teenagers listed as missing are now sought as suspects in the murders of Australian man Lucas Fowler and his US girlfriend.

Rising waters were prompting further evacuations in central Canada on Thursday, with the mayor of the country's capital, Ottawa, declaring a state of emergency and Quebec authorities warning that a...

A house fire in the eastern Canadian city of Halifax has killed seven children from the same family, Halifax police said.

Landscape gardener Bruce McArthur targeted victims linked to Toronto's Gay Village over a period of seven years, with some arguing that police may have missed chances to catch the killer earlier.

Four people, including two police officers, were killed in a shooting in eastern Canada in the latest eruption of gun violence across the country that has led to calls for weapons bans in cities.

US President Donald Trump said he had instructed his representatives not to endorse a joint communique put out by the G7 leaders after what he called Canadian PM Justin Trudeau's "false statements" at a news conference.

At least 24 people were hospitalised, four with life-threatening injuries, following a bus crash on a major highway leading to the Canadian capital of Ottawa.

A driver ploughed his rental van into a crowd, killing nine people and injuring 16 along a roughly mile-long stretch of busy Toronto footpath during lunch hour on a sunny afternoon, police said.

Toronto police say that they have charged Bruce McArthur with a sixth murder, expanding the number of deaths blamed on the 66-year-old landscaper in a case that has shaken the city's gay community.

Toronto police are investigating an attack on an 11-year-old girl whose hijab headcovering was repeatedly cut on her way to school, heightening pressure on Canadian governments to take further action on attacks on Muslims.

Canada will expel a Venezuelan diplomat and also bar the country's ambassador from returning, two days after Venezuela booted out Canada's envoy for criticising its rights record.

British Columbia has banned all grizzly bear hunting in the western Canadian province with immediate effect, expanding on its existing ban on trophy hunting.