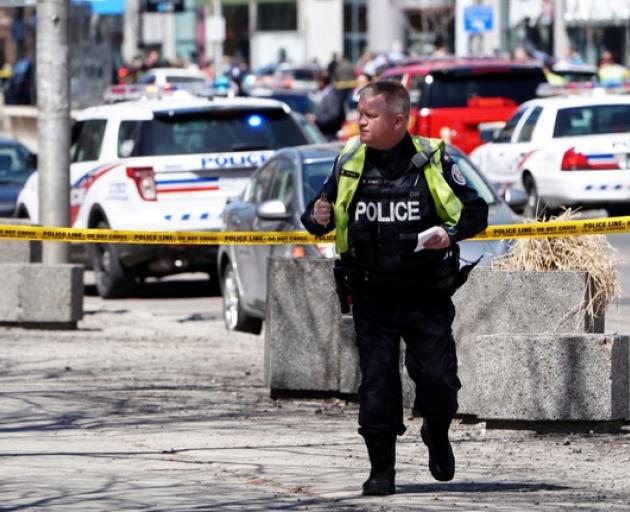 A police officer responds to an incident where van struck multiple people at a major intersection in Toronto's northern suburbs in Toronto. Photo: Reuters

Officials declined to answer questions about what motivated the driver to steer his vehicle toward people just before 1.30pm. They said the driver was in custody and stopped short of calling it a deliberate act.

But at least one witness described the driver as appearing to deliberately target victims on his roughly 1.6km-long rampage, according to media reports.

"This is going to be a long investigation," Toronto Deputy Chief Peter Yuen told a news conference after disclosing the death toll.

A Reuters witness saw at least two tarp-covered bodies at the site of the incident. Five people remained in critical condition at Sunnybrook Health Services Centre on Monday afternoon, the hospital said.

Canada's public safety minister, Ralph Goodale, declined to comment on what may have motivated the attack. 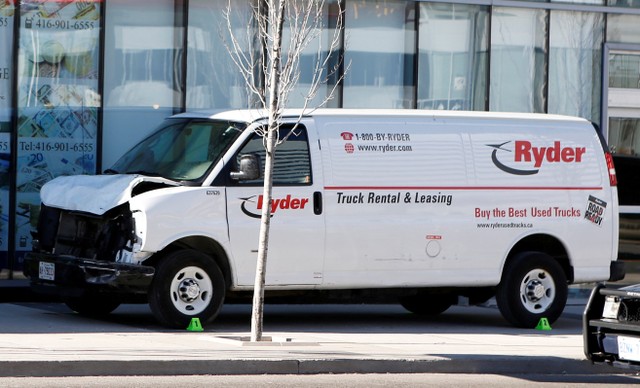 A van seized by police lies damaged after an incident where a van struck multiple people at a major intersection in north Toronto. Photo: Reuters

"The investigation is at a stage where no further information can be confirmed at this point," Goodale told a news conference said. "The police are conducting obviously their thorough investigation to determine what happened and why it happened, the motivations involved."

Ryder System Inc spokeswoman Claudia Panfil confirmed that one of the company's rental vehicles had been involved and said the company was cooperating with authorities.

There have been a string of deadly vehicle attacks in the United States and Europe, including an October 31 attack in New York that killed eight. Islamic State militant group encourages its supporters to use vehicles for attacks.

The incident was one of the most violent in recent Canadian history.

In September, a Somali refugee who was charged with attempted murder on allegations he ran down four pedestrians with a car and stabbed a police officer outside a sports stadium in Edmonton, Alberta.

"It's unprecedented," said John Flengas, acting superintendent in the city's paramedic services. We've never seen anything like this in the city of Toronto."

The incident occurred about 30kms away from the site where Toronto is hosting a Group of Seven foreign ministers.

A man who gave his name as Ali told CNN he saw the van and that the driver appeared to have been targeting people.

"This person was intentionally doing this, he was killing everybody," the man said. "He kept going, he kept going. People were getting hit, one after another."

He said a number of the victims were older people and at one point he saw a stroller fly into the air.

At least one person was struck outside on the footpath outside an Anglican church, north of where the van came to rest in front of a currency exchange in a condominium tower.

Yonge Street is large, divided boulevard at the point where the incident occurred, its center meridian dotted with planter boxes and sculptures.

Some of the victims were struck in a public square popular with office workers on lunch breaks. Aerial photos of the scene posted on social media showed a food truck parked just a few feet away from where emergency workers busily transferred people onto stretchers.

There was no noticeable change in security around the Intercontinental Hotel where the ministers of Canada, the United States, Britain, France, Germany, Italy, and Japan were meeting on Monday. 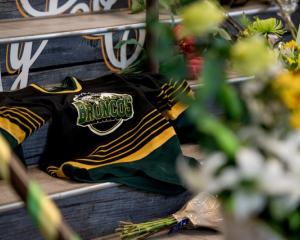