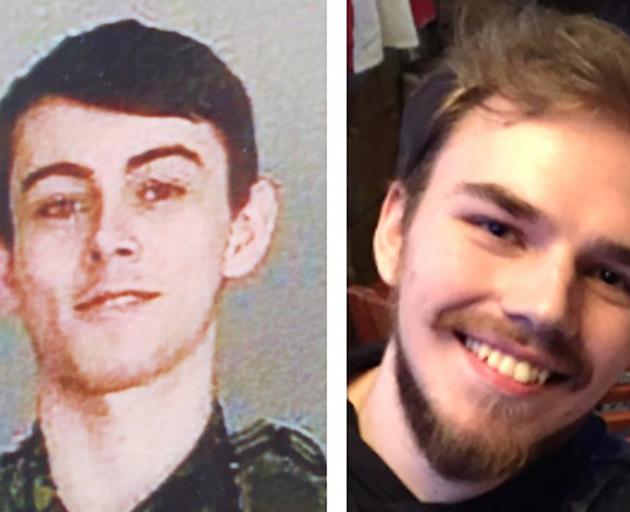 Bryer Schmegelsky (left) and Kam McLeod sparked a nationwide manhunt after killing three people along a remote stretch of Canadian highway. Photo: Reuters
The two teenagers who shot dead Australian tourist Lucas Fowler, his US girlfriend Chynna Deese and university lecturer Leonard Dyck on a murderous highway rampage in Canada hoped to hijack a boat and sail to Africa or Europe to elude authorities.

The dramatic plan was captured on a video Kam McLeod, 18, and Bryer Schmegelsky, 19, took as Canada's police and military chased them more than 3,000km across northern Canada.

The Royal Canadian Mounted Police has released a report on its investigation, which points to the murders as being random and suggests the teens were seeking "notoriety" for their bloodshed.

"There's no indication these were planned or predicted," Assistant commissioner Kevin Hackett told reporters at a briefing in Vancouver.

McLeod and Schmegelsky began their rampage on July 15 in a remote area alongside a highway south of Liard River Hot Springs in northern British Columbia.

The van Mr Fowler, 23, from Sydney, and Ms Deese, 24, from North Carolina were using for a road trip had broken down and McLeod and Schmegelsky, armed with two SKS semi-automatic rifles, shot them multiple times.

"It appears that the shooter(s) stood behind the victims for at least some of the shots," the report states.

They recorded six videos and three still images on the camera as they travelled more than 3,000km east to Gillam, Manitoba, giving authorities some insight into their state of mind.

They were described as "cold" and "remorseless" on the videos.

The RCMP said it would not release the videos or photos publicly because they believed it would inspire copycats and the teenagers appeared to crave notoriety for their crimes.

On one 58-second video, Schmegelsky admits "they are responsible for the three murders" and "they were going to march to Hudson Bay where they planned to hijack a boat and go to Europe or Africa".

In another video, Schmegelsky describes how "they have shaved in preparation for their own death" and "plan to go back to kill more people and expect to be dead in a week".

Gillam is located near Hudson Bay where polar bears are among the wild animals they could have encountered.

The teenage killers decided to end their lives after they became stranded in an area near a fast-moving river and thick bushland west of Hudson Bay.

The report includes numerous chilling sightings, including a motorist who pulled off to the side of a highway in British Columbia late in the evening two days after Mr Fowler and Mrs Deese were murdered and before Mr Dyck was shot.

The motorist said he saw a male in the darkness holding a long gun and approaching his car "in a tactical or hunting stance".

The motorist drove off.

On May 22, the RCMP were contacted by an unnamed witness who knew the teens and told investigators "the boys may have been involved in the murders".

"This is the first time that police learned that McLeod and Schmegelsky may be capable of the murders which conflicted with original witness statements from family and associates," the report states.

Ms Deese's family released a statement describing Chynna as "a ray of sunshine, and for her to be taken has made the world feel a bit darker".

"The loss we continue to endure is shattering, but Chynna's memories are a benediction to her genuine happiness and intense love of life," the Deese's said.