At least 24 in hospital after Canada highway crash - report

24 people hospitalized after bus crash near Prescott, ON. Four with life-threatening injuries. As a rule buses are much safer than personal vehicles, but they would be much safer still with passenger seat belts.STORY so far >> https://t.co/VO4nw1WmwJ pic.twitter.com/ioxpanb6JF— #VisionZero Canada (@VisionZeroCA) June 4, 2018

At least 24 people were hospitalised, four with life-threatening injuries, following a bus crash on a major highway leading to the Canadian capital of Ottawa on Monday (local time), local media reported, citing police.

Emergency crews arrived on the scene to find a bus in a ditch alongside highway 401 near Prescott, Ontario, some 90 kilometres south of Ottawa, provincial police spokeswoman Tina Hunt said.

As many as 40 passengers were on the bus, said Hunt, who declined to confirm the number of injuries. It was not immediately clear if another vehicle was involved, she added.

They all spoke Mandarin and needed translators, McIntyre said, adding she was not sure of their nationality.

Kingston Health Sciences Centre spokesman John Pereira said the hospital expected to admit "fewer than five" patients in critical condition as a result of the crash.

At least two helicopters, a land ambulance and a fixed-wing aircraft were sent to the scene, according to a spokesman for Ornge Air Ambulance.

The crash comes almost two months after a tractor-trailer collided with a coach bus carrying a youth hockey team from Humboldt, Saskatchewan, killing 16 people and injuring 13. The accident and its young victims sent the country reeling. 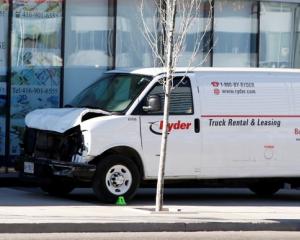