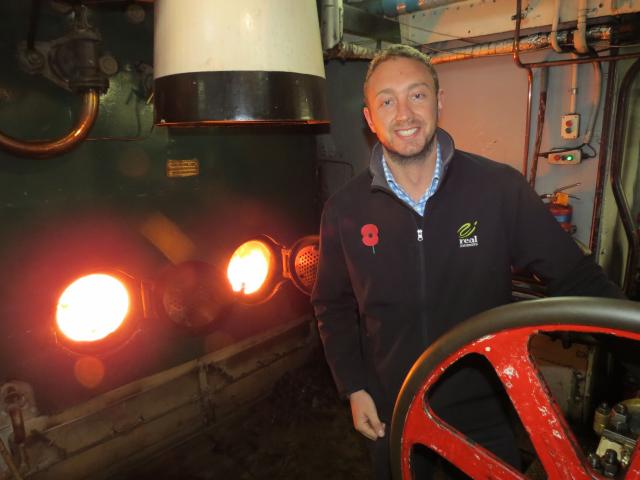 Real Journeys Queenstown operations manager Luke Taylor stands yesterday in the sweltering engine room of TSS Earnslaw, which will be inspected for preventive maintenance during the annual survey of the steamship from next month.

Despite unsettled weather over the Christmas-New Year period, some businesses in Otago's holiday hot spots are reporting record summer results.

Queenstown's lady of the lake was celebrated on a Dunedin railway yard bridge yesterday.

Keeping a complex 101-year-old steam-powered machine afloat, in more ways than one, is a full-time job for Real Journeys staff and contractors at this time of the year.
A piston at the heart of TSS Earnslaw has to be custom made to replace its century-old predecessor, a job that will lead to the ''Lady of the Lake'' being towed on to the Kelvin Heights slipway.

After another year of clocking up 40,000km of icy water between Steamer Wharf and Walter Peak, the normally prim and proper Edwardian ''Lady of the Lake'' is letting it all hang out. James Beech reports.
Eight families will be treated to a ride on TSS Earnslaw this weekend during a Child Cancer Foundation (CCF) event that will, in part, look to establish a formal branch of the foundation in the Wakatipu.

TSS Earnslaw made a graceful return to Glenorchy yesterday for a celebration which dovetailed the Lady of the Lake's centenary with the 150th anniversary of settlement at the head of Lake Wakatipu.

It was hard not to get emotional. As TSS (twin screw steamship) Earnslaw steamed into Queenstown Bay at 1.45pm yesterday, led by Coastguard Queenstown and followed by a flotilla of 20 boats, all 356 passengers on board knew they were part of something special.
Today • 10am: TSS Earnslaw seniors cruise ($60 per adult). A unique opportunity to relive the glory days of TSS Earnslaw with a cruise around Frankton Arm. Cruise includes morning tea with traditional home baking and tea/coffee. On board will be entertainment, music and historians.

TSS Earnslaw crew are wearing Edwardian dress during special return cruises from Queenstown Bay to Frankton Arm this week, before the centennial celebrations get a full head of steam with the first re-enactment of the Earnslaw's maiden voyage tomorrow, 100 years to the day.

Before working as a pianist on TSS Earnslaw from 1994 to 2008, Bill Purvis owned and worked on a sheep farm in Western Southland.

An Australian man's first attempt at woodwork, re-creating the TSS Earnslaw on which he and his wife honeymooned almost 40 years ago, has won three prizes in a woodwork competition in Queensland.

"If you have enough courage, hope and belief in yourself, you'll get there in the end," is the message Arrowtown author Alma Stevenson says she wants children to take from reading her new book.

A cherished childhood memory of life with the TSS Earnslaw has won an elderly former resident of the Routeburn Valley the VIP treatment during the vintage steamship's centenary in October.

A copy of a 143-year-old painting by early surveyor John Turnbull Thomson is now on display on TSS Earnslaw.

"Hopelessness is written on the faces of the people living in the poor quarters of the great cities in England, where the workers are struggling along without a chance of improving their hard conditions. There is a great deal of poverty in the big cities. Industrial unrest prevails, and thousands of people are leaving Great Britain; in fact, I think there is trouble waiting ahead for the Old Country."

Three Englishmen facing charges relating to incidents on board TSS Earnslaw earlier this month will make a donation to charity and meet the cost of cleaning up their mess as part of a diversion sentence.

Two of Otago's pioneering ships will appear on postage stamps next month, to pay tribute to the significant role they played in shaping New Zealand.