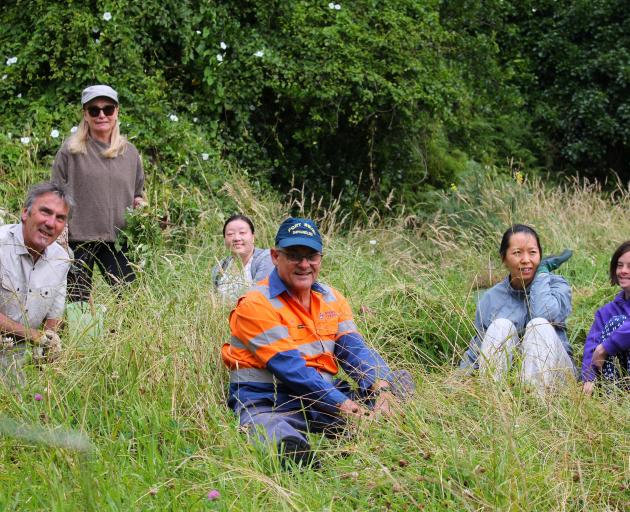 Convener Steve King said the group formed during the first Covid-19 lockdown, and in September 2020 it signed an agreement with the Dunedin City Council to carry out weed control, predator control, biodiversity monitoring and native habitat restoration.

The council provided native trees and shrubs and some were donated by Nichol’s Garden Centre, Mr King said.

In the 1880s the site was a quarry run by the Caversham Borough Council, and later, in the 1920s, it was reopened by the Dunedin City Council.

By the 1950s the quarry was no longer being used and over time the site returned to a more natural state.

Much of the growth was a very common coastal indigenous shrub called taupata, Mr King said.

"So what we are trying to do is add to the biodiversity a wee bit."

In among the taupata the group had planted indigenous species including matai, totara and rimu.

"So eventually it will be like a little coastal Otago forest in here."

Convolvulus was also being cleared away and native ferns were flourishing in little pockets around the site.

By rewilding the site the group hoped to make it a native habitat for local wildlife.

Otago skinks and kereru were some of the native species observed at the site.

The group was undertaking pest control, and had trapped about two dozen possums and about the same number of rats.

The group had removed large patches of blackberry and ivy and planted more than 150 native trees, shrubs, ferns and grasses.

But there was always much to do and the group was hoping find a few more willing workers to help keep the site beautiful and pest-free.