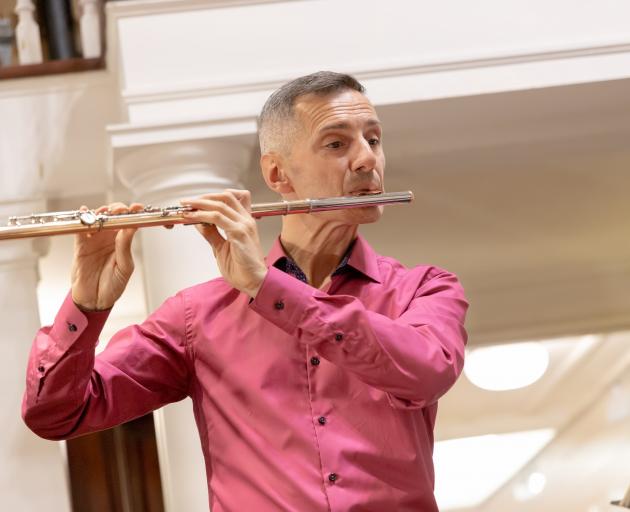 Dunedin Symphony Orchestra principal flute Luca Manghi is thrilled to be performing in Bach’s Flute Concerto in two matinee series concerts this weekend. PHOTO: RITA PACZIA
After a Covid-enforced hiatus for the first half of the year, the Dunedin Symphony Orchestra launches into a very busy and varied 2022 concert programme with two Forsyth Barr Matinee Series concerts this weekend.

DSO principal flute Luca Manghi will feature in the "Bach and Beyond" concerts on Saturday and Sunday, performing as soloist in the centrepiece work, Bach’s Flute Concerto.

Manghi, of Auckland, has flown to Dunedin this week to join in final rehearsals for the concerts, with conductor Brent Stewart, and is looking forward to performing with his DSO colleagues again.

"The Bach Flute Concerto is a wonderful mixture of virtuosity and elegance, with a touch of melancholy in the second movement’s slow dance," Manghi said.

"It is a work where communication with the orchestra is extremely important, and it’s great that I have the opportunity to share this experience with my friends in Dunedin."

Stewart, in his first outing with the orchestra, said he was thrilled to be joining it in celebrating the "return to the shared joy of live music-making with a programme of uplifting and unmissable works".

Along with the Bach Flute Concerto, the matinee concerts will feature the strings in Mozart’s Divertimento and showcase the woodwind and brass in Gounod’s Petite Symphonie, before the full orchestra comes together for Schubert’s joyful, lyrical Symphony No. 3.

"There is nothing quite like the live, shared experience," she said.

"One of the lessons we have learned through the pandemic is that we have a human need to get together and experience things such as live music — we have all really missed it."

The DSO’s Matinee Series concerts were a popular feature of its programme each year, a boutique-sized orchestra performing usually four works in the intimate setting of the King’s and Queen’s Performing Art Centre.

The excellent sight-lines provided by the centre’s stadium seating and the chance to closely observe each section of players during the performance helped make the concerts an audience favourite, Harris said.

On top of its own concerts, the orchestra will also perform in a range of other shows, including in support of New Zealand Opera’s production Strangest of Angels, a "Bach to Baby" concert during Arts Festival Dunedin in October and a special performance in association with Alzheimer’s Otago.

Local musicians (of any standard) and singers are also invited to join the orchestra and City Choir Dunedin in a special "Monster Mozart Mash" concert on July 30, which will feature works by Mozart, along with the Hallelujah chorus from Handel’s Messiah.

"It is going to be a hugely busy time, as we squeeze a whole year’s concerts into seven months, but it will be great fun," Harris said.

- The Dunedin Symphony Orchestra’s Forsyth Barr Matinee Series — Bach and Beyond concerts will be held on Saturday at 5pm, and Sunday at 3pm, at the King’s and Queen’s Performing Arts Centre