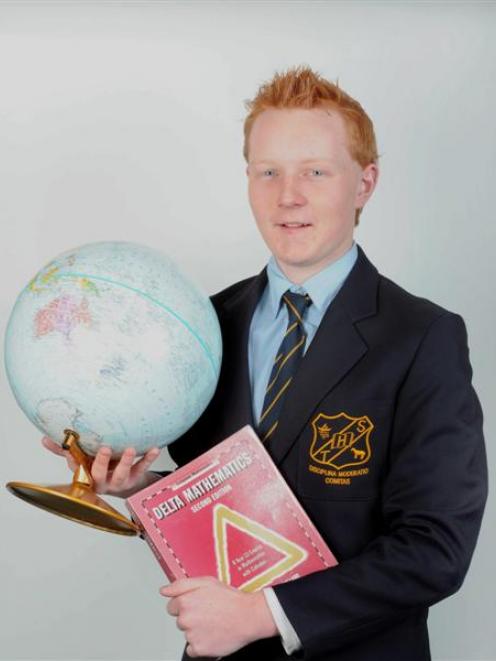 David Smith
Building a life-size hovercraft while in year 9 was a proud moment for practical academic David Smith.

The 17-year-old Tokomairiro High School pupil won the school science fair with a project which pointed towards his future.

David is attracted to the career of engineering, which involves one of his top subject areas - science.

‘‘It looks so fun, building roads and stuff.'' He also knows there are many job opportunities in the field and various travel options.

Science is such an interest that he considers the University of Otago Hands on Science event in January a highlight of his year.

David was able to carry out different research projects based on chemistry.

He enjoyed the opportunity to be with like-minded peers.

‘‘Meeting the people from other schools was the best part,'' he said.

Despite this, geography is his favourite school subject.

He has studied it since year 11. ‘‘It's all general knowledge and is easy to get my head around.'' However, David is not just an academic.

He also participates in hiking, orienteering and athletics.

He had walked the Routeburn Track and the Kepler and has his sights set on the Milford at the end of the year.

The school community is also important to David, describing the small school as something of a family.

This year he has taken on the role of a prefect, is a peer support leader, a deputy house captain and was chairman of the ball committee.

Role model: Two role models besides my parents would be Thomas Edison, because he never gave up on his goal of inventing the light bulb no matter how many times he failed, and Leonidas because even though he was up against the greatest of odds facing certain failure he stood tall and held his ground. That is a quality I wish to apply to every aspect of my life.

Hopes for the future: Study at Canterbury University and become a civil engineer. He is attracted to the job opportunities and the practical type of work.