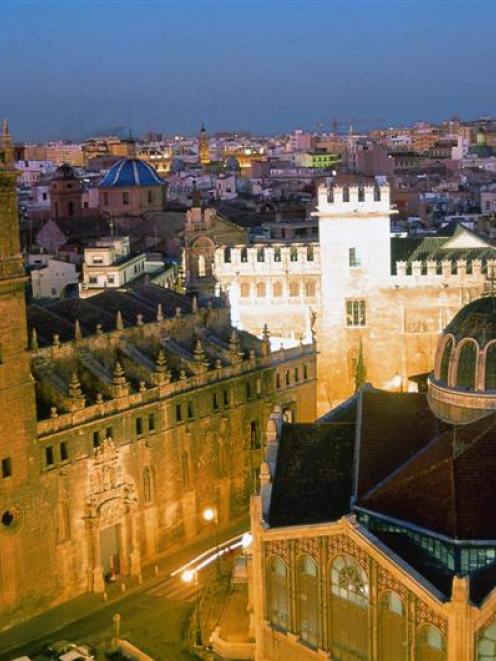 An aerial view shows the Palau de les Arts Reina Sofia (left) and the L'Hemisferic (right) at the City of Arts and Sciences in Valencia. Photo by Reuters.
Take Paris, add palm trees and a handful of fruit to the wine, swap a snaking, sunken park for the Seine and paella for steak frites, put the whole thing on the sea and you get something like Valencia.

With a youthful vibe driven in part by the University of Valencia, Spain's third-largest city bursts with cultural offerings, stunning architecture and a sometimes jarring juxtaposition of the ancient and the contemporary - everything from the Holy Grail to the futuristic City of Arts and Sciences, designed by world-renowned local architect Santiago Calatrava.

7pm: Choose a hotel in the city's compact, historic centre, for both maximum convenience and aesthetic charms. After checking in, head to the Plaza de la Virgen for a pre-dinner aperitif of sangria or, better yet, Agua de Valencia, a local concoction of sparkling wine, orange juice, vodka and gin. Beware, this firewater's gentle taste belies its potency. Take in the jumble of locals, tourists, pigeons and formally attired churchgoers attending a baptism or wedding just a stone's throw away at the Basilica de la Virgen.

9pm: While it's early for dinner by Spanish standards, you're a tourist, so go ahead and head to La Carme for a bargain 19 ($NZ34) three-course, fixed-price menu. Choices might include hake in a rich white sauce, grilled pork, roast duck or specialty ribs, with perhaps a fig, pine nut and cheese salad or a creamy carrot soup starter, capped by the requisite creme caramel.

11pm: Wander the narrow, cobbled back streets and wend your way back to the centre, taking in the stunningly lit building and monument facades.

Stop for a nightcap in the Plaza de la Reina. Or if your taste runs more in that direction, ice-cream shops abound in the area, staying open past midnight.

8am: Start the day with a stroll through the Gardens of Turia, a onetime river now diverted that is home to lush, bucolic sunken parkland that cuts a narrow swathe through the city. Pampas grass stands beside riotously blooming trees, fountains, and a patchwork of bridges that span the greenway.

10am: Head over to the Central Market, where some 1000 vendors sell everything from Spanish cheeses, olive oils and fine hams to fruit and vegetables, spices, meats and all manner of seafood.

Pick up a few packs of spices for the folks at home. Pimenton, or paprika, is a particular bargain, as is saffron, known as the world's most expensive spice. Have a light Valencian breakfast: fartons, a light, elongated doughnut, and wash it down with horchata, a cold, sweet milky brew made from tiger nuts.

Noon: It's time for a dose of culture, and the expansive, recently renovated Belles Arts, or Fine Arts Museum, beckons, renowned for an extensive collection of (religious) art as well as works by Goya, Velazquez and El Greco. Next door you'll find the welcoming Jardines del Real park and an array of fountains, native plantings, squares and dozens of stray cats, many as friendly as any domestic house cat.

2pm: Like all meals in Spain, lunch is typically eaten at a time that Americans would think of as late. Try the sleekly modern Palo Alto and bask in the deferential service and copious, multicourse Mediterranean offerings of pates, salads, stews, rice dishes and roasted meats.

3pm-5pm: It's siesta time, so when in Valencia, do as the Spanish do and recharge for a bit. Things really do mostly shut down from 2pm until about 5pm.

6pm: Take in the gorgeous late afternoon light and incomparable panoramic view from a vantage point atop the Serranos Towers (above), the 13th-century monument that stands as the largest gothic gateway in Europe.

7pm: Try the Dublin House for pre-dinner drinks. A relatively new addition to the Plaza del Patriarca, it attracts a diverse crowd ranging from families to couples to football fans, who turn out to catch Valencia CF matches.

9pm: For dinner, a table at La Utielana is worth the wait, although if you get there right at opening at 9 you'll be seated straight away. With a homey vibe and warm hospitality, it's a favourite of locals and visitors in the know for hearty, authentic Spanish cuisine.

But if you're pining for a bit of home, or Naples, try A Pomodoro, a moderately priced, bi-level pizza and pasta hot spot said by many locals to serve the best pizza in the city. Don't miss a bottle of their excellent house wine.

11pm: Street cafes come to life in the midnight hours, so there is a wealth of choices for a nightcap in the city centre.

9am: Most shops and even some attractions still close on Sunday.

So rise early and head to the Rastro flea market, next to the football stadium, where you'll find hundreds of vendors selling everything from houseware and vintage games or clothes to furniture, cookware, books and vinyl records.

11am: Pick any local footpath cafe and enjoy the traditional breakfast of coffee with hot milk, fresh bread and the ubiquitous tortilla, which is basically a potato omelette that's more tuber than egg.

Noon: Lucky for you, museums do open on Sunday. Visit the modern art museum (Ivam), which, like most, is free and boasts first-rate exhibitions such as the current Robert Morris retrospective that runs until January.

If time allows, take in the Botanic Garden, just a few minutes' walk along the Turia.

2pm: You can't visit Valencia without sampling its signature dish, so tuck into a platter of paella served at virtually any local restaurant dishing up Spanish cuisine. The best can be found seaside, at either Malva Rosa or a short ride from town in the village of El Palmar.

4pm: Walk off that heavy lunch, which might suffice as dinner, with a stroll down the Gardens of Turia to the futuristic City of Arts and Sciences, Valencia's modern complex of aquarium, opera house, natural history museum, reflecting pools and more. Great photo ops for any student of architecture.

6pm: End your weekend with a glimpse of the Holy Grail. The cup that is purported to be one used by Jesus Christ at the Last Supper rests in the Cathedral of Valencia. 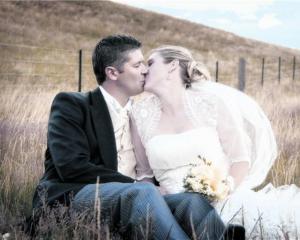 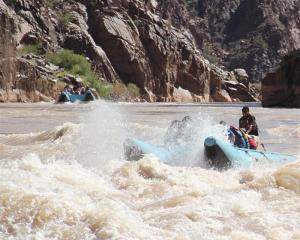 Captured by the Colorado 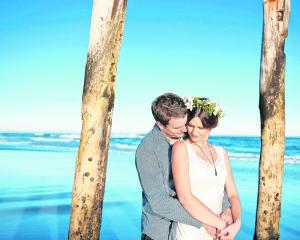 Guests can give towards honeymoon 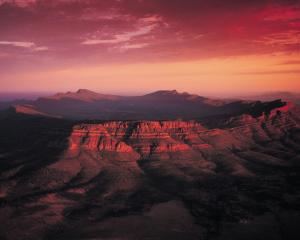 Nature even better from a lodge