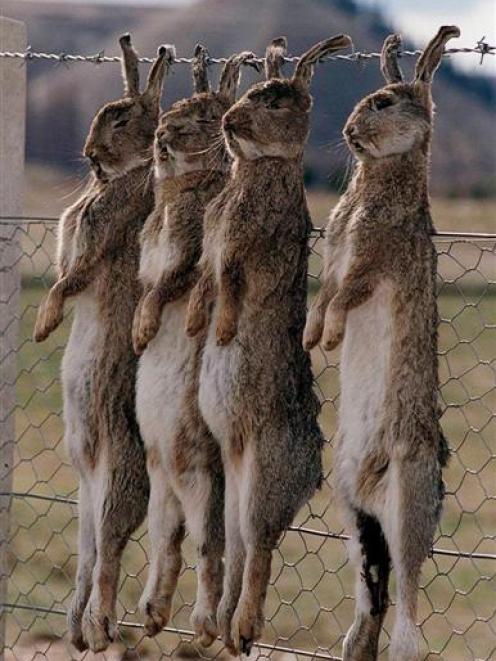 Dead rabbits strung on a fence at Lowburn, near Cromwell, after the illegal release of rabbit calicivirus disease (also called rabbit haemorrhagic disease) in Central Otago in 1997. Photo by Gerard O'Brien.
Ministry of Agriculture staff yesterday converged on four Cromwell farms after the discovery of the rabbit-killing RCD virus but are saying privately it will be impossible to eradicate.

After weeks of rumour that RCD was loose in the South Island high country, MAF confirmed yesterday that rabbits found dead at Lowburn at the weekend had been infected with the virus. They believe someone illegally imported the virus and released it.

The Otago Daily Times has been told the outbreak is particularly widespread throughout Otago and Canterbury and will grow.

Rumours were rife last night that further RCD outbreaks were imminent on farms and that the first releases were made on 12 properties in the Mackenzie basin and Central Otago.

The initial response by MAF was to declare four Lowburn farms "restricted places" and to use police road-blocks to cordon off the area to prevent people from removing infected rabbit material.

Under "Operation Lowburn", road-blocks were set up on the Cromwell-Wanaka road, on the shores of Lake Dunstan, at the Kawarau Gorge entrance, at Bannockburn bridge, the Dead Man Point bridge near Cromwell, at Tarras and at Lindis Crossing.

The roads would not be closed and at worst people would be detained for a short time while vehicles were searched for rabbit material, said acting Otago police-district manager Inspector Athol Soper.

Any rabbit material found would be seized and driver details taken. He stressed people should not pick up rabbit carcasses from the roadside.

At this stage the police had not been asked to become involved in any inquiry.

The four Lowburn Farmers are forbidden from removing risk materials such as rabbit carcasses or other livestock from their properties without MAF permission.

Many farmers in the rabbit-prone areas of Central Otago were last night rejoicing at the news RCD was here, seeing it as relief from high-cost poison operations which many say they cannot afford.

Doubts that it was too cold here have been dismissed by some farmers contacted who believe the virus would survive and prosper next autumn.

However, that joy was tempered by a warning from University of Otago immunologist Prof Frank Griffin that the illegal release of the virus would limit its chances of success.

The combination of the virus being released in the wrong season, MAF efforts to contain the outbreak and the sporadic release of RCD could not add up to a worse scenario, he said.

A spokesman for the Minister of Biosecurity, Simon Upton, said the Cabinet would discuss the outbreak at next Monday's meeting.

Dr O'Neil said MAF's first priority was to determine how widespread the outbreak was and then determine whether eradication was possible.

"Initial indications are that it appears there are a greater number of releases of the virus in a wider area than what we initially thought," he said.

At least two helicopters were used yesterday to monitor the extent of the outbreak in Central Otago but high winds kept other helicopters grounded in the Mackenzie Country and Marlborough.

Regional council and MAF staff were taking rabbit samples from affected and suspected farms and were considering the feasibility of shooting and poisoning rabbits on affected farms to eradicate the disease.

Dr O'Neil said he could call in as many MAF staff as were needed to eradicate, contain or control the virus, as it was considered an unwanted disease and Government's policy was to eradicate it.

If the disease was spread by bait, it could die out naturally as bait disappeared, but he said it was too early to know how it was being spread.

He was concerned the RCD strain found could be tainted by another organism.

Anyone convicted of importing an unwanted organism could be fined up to $1000,000 and spend up to five years in jail.

The chief executive of the ORC, Graeme Martin, said the council reported its suspicions to MAF, which analysed the samples.

He said the ORC would assist MAF with its investigation but believed eradication would be difficult.

"It is a significant size and eradication attempts would be difficult. Of course it is a matter of how long eradication is attempted and also what might be spreading it."

The reaction of most farmers to the arrival of the disease is a mix of apprehension, delight, excitement and a sneaky sense of admiration for those who refused to put their livelihoods on the line by trying to defeat the rabbit plague by conventional means.

Of course there is dismay at the way it was apparently brought in - but no farmer will be putting up his or her hand and admitting to be part of the action. At worst, the act is seen by most farmers as a misdemeanour.

There is a strong belief in the rural community that the Government had pushed high country farmers into a corner and knowingly forced their hand. The Government guessed runholders would not surrender to the rabbit and be forced off their land - and now the politically unpleasant decision to allow RCD has been taken out of its hands.

The plans to introduce the disease illegally were obviously carefully calculated and even the timing caught the authorities by surprise. It appears from unofficial reports of the spread of the disease - from Central Otago through to Marlborough - that it was a large-scale exercise aiming at doing the job properly.