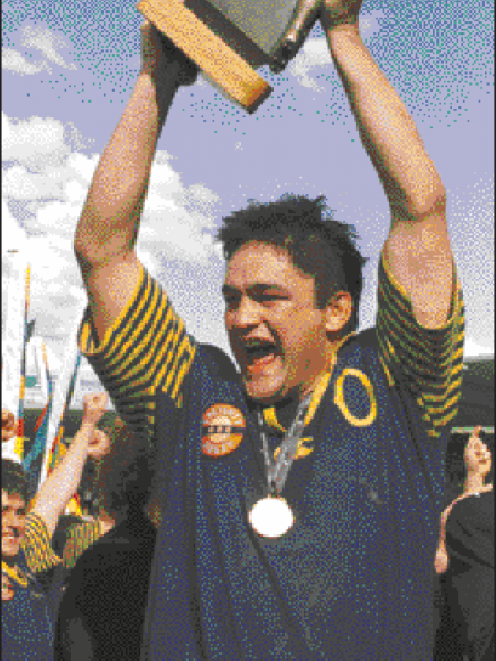 Otago captain Taine Randall holds aloft the National Provincial Championship trophy after his team defeated Waikato 49-20 in the final at Carisbrook. Photo from the <i>ODT</i> Files.
Otago sport may never know another day, another occasion like this after its rugby team became the undisputed national champion with a resounding 49-20 win over Waikato at Carisbrook yesterday.

Blue and gold weather, which produced temperatures in the mid-20s, blue and gold spectators - who produced an almost capacity crowd of more than 40,000 - provided the perfect backdrop for a commanding performance which yielded Otago its first national title since 1991.

Never has an Otago side faced such pressure to perform from its own public; never has it delivered so emphatically. And, after the players dragged themselves around Carisbrook for the obligatory lap of honour after their seven-tries-to-two triumph, there was a special brew of Speight's awaiting them in the dressing-room to celebrate the occasion.

Exactly two months before Christmas and in the province's 150th anniversary year, Otago's display yesterday had red-eyed old-timers comparing the side with the great team of 1948.

Not only did Otago win, but it overcame adversity to do so with style and panache.

Had it not been for a farewell gesture to allow John Leslie the last conversion attempt - place-kicking has never been his strong suit - Otago would almost certainly have passed the half-century for the fifth time in 11 NPC matches. Even so, it was the highest winning score in a first division final.

"It's all yours, Otago," Waikato captain Ian Foster said at the presentations. Danie Craven uttered the same sentiments after the All Blacks vanquished the Springboks in the tumultuous series of 1956, but with sourness, not with grace.

"This is a magic day for us . . . for everyone in Otago," captain Taine Randell said.

All the Otago players were cheered to the echo as they collected their winner's medals.

The ultimate thoroughbred, Jeff Wilson, kissed his as he waved to the crowd. For one of New Zealand's greatest All Blacks to display such unconcealed delight made this final triumph that much more special for those who came to cheer.

But this victory, like the previous eight on the campaign trail, was built on the foundation of hard forward graft against a committed Waikato team.

Otago supporters cried and hugged their neighbours on the terraces when the full-time whistle blew at Carisbrook yesterday.

Their heroes, Otago, were the champions.

All around the ground Otago supporters danced, cheered and sang in a sea of blue and gold at the final whistle, while the few Waikato fans in the crowd were quiet.

When Otago's rugby anthem Southern Man broke out after the game, several tired but smiling Otago players joined in as lustily as the rest of the crowd.

Otago back John Leslie, who played his last game for Otago yesterday before leaving for Scotland, was hoisted on the shoulders of his team mates at the game's end.

As the team passed the terraces during its victory lap, it stopped and bowed to the crowd, and they erupted.

Throughout the game, the crowd of 40,026 - close to a third of Dunedin's population - chanted, screamed and yelled, waving flags and banners as the rugby fever which has gripped Dunedin for the past week finally broke.

The cry of "Otaaago" started to ring out through inner-city suburbs from about 1pm, as groups of supporters walked to Carisbrook on a hot, windy, spring afternoon.

The verbal enthusiasm briefly turned physical at the ground, with the terrace crowd hurling plastic bottles and mostly empty beer cans at a passing and taunting parade of Waikato flag-bearers and at the Waikato mascot, Mooloo.

Blue and gold were the stand-out colours around the ground - the one notable exception a group of about 30 Waikato supporters in one of the stands, wearing their team's jersey.

Thousands of spectators had their faces painted blue and gold, hundreds dyed their hair and many others wore blue or gold tinsel wigs.

From the start, the good-natured crowd seemed in little doubt as to which team would win.

All doubt appeared to be erased when Brendan Laney dived over the line about halfway through the second half, bringing the score to 25-6.

Part of the terrace crowd started singing We are the Champions.

Another try, 10 minutes from full-time, brought the score to 39-6 and raised a chant of "We won the finals".

At the end, few wanted to go home. The party mood in the ground continued for some time after the prizegiving.