400-plus pages of finger-wagging strips novel of weight 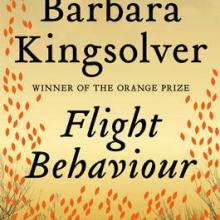 Flight Behaviour<br><b>Barbara Kingsolver</b><br><i>HarperCollins
Strange things are happening in Appalachia. The natural world as we know it is coming to an end, overheated by human greed.

''Global warming'' is a dangerously loaded expression in the rural, Republican-loving, God-fearing Tennessee of Barbara Kingsolver's didactic and preachy new novel, Flight Behaviour. The people of the fictional Feathertown have been taught by radio that it's a big-city scam concocted by Al Gore.

But then shifting global weather patterns bring millions of butterflies to the property of Dellarobia Turnbow's family. They're monarchs, the same ones that usually migrate to Mexico. Freaked out by warmer temperatures and a logging-induced flood that wiped out their Mexican habitat, they've turned north to spend winter in the American South.

In Kingsolver's telling, the locals are too closed-minded to wrap their brains around this scientific truth, even when it's staring them in the face.

The appearance of the butterflies in the hills above Feathertown is a miracle, the local evangelical preacher says. Let's charge people to see them, Dellarobia's mother-in-law says. No, says Dellarobia's father-in-law: Let's kill them all with DDT!

Dellarobia, a stay-at-home mother with two young children, is different - she took honours English at Feathertown High. Not only does it rile her that people in Feathertown end their sentences with prepositions, but she's also one of the small minority of enlightened people there who don't automatically distrust outsiders and scientists.

When a group of lepidopterists alights in Feathertown, Dellarobia learns the dark secret behind the appearance of those millions of feathery creatures.

''They said it means something's really gone wrong,'' she tells her husband, Cub.

Flight Behaviour has many of the trappings of a work of literary fiction. A strong female protagonist with a complicated recent past, for example, and extended, dreamy descriptions of a shifting natural landscape. But after just a chapter or two, the novel's true purpose becomes clear - it's a Blue State morality tale about Red State people and Red State thinking.

Kingsolver, who was raised in nearby Kentucky, spends much of the 400-plus pages of this book wagging her finger at poor white people. Dellarobia, whose dreams of leaving Feathertown to go to college were thwarted by a teen pregnancy, is her Blue State-thinking stand-in. She's trying to shake loose from the roots of her lethargic culture.

Her friend Dovey is another Blue Stater at heart: She works at a grocery store meat counter and cringes when she sees people ''with `heart attack' written all over their faces'' buying bacon.

Over the course of a career with several bestsellers, including The Poisonwood Bible, Kingsolver has built a reputation as a skilled novelist unafraid to tackle issues of inequality and cultural conflict. With Flight Behaviour, however, Kingsolver appears to be turning her back on serious literary aspirations. The writing is often turgid and peppered with mixed metaphors and sloppy similes.''

The heels of her oxblood boots struck the waxed floor loudly,'' Kingsolver writes when Dellarobia enters a church, ''advertising her travelling whereabouts like a GPS.''

More than anything, it's theunsubtle condescension of Flight Behaviour that strips the work of artistic weight.

Consider Kingsolver's description of a local named Dimmit Slaughter, who rides up the mountain on his Harley to look at the butterflies: ''His T-shirt stretched to within an inch of its life across his broad belly, where the letters distorted outward like horror movie credits.''

Dimmit is one of a series of ''hick'' caricatures who share a stage with a series of equally stereotypical Blue Staters, including a man named Leighton Atkins who arrives in L.

L. Bean attire to pass out fliers advocating a sustainability pledge no-one in Feathertown can possibly follow: ''Switch some of your stocks and mutual funds to socially responsible investments.''

Kingsolver does give us a backstory about Dellarobia's marriage to Cub that has enough moments of emotional insight to suggest we're reading a thoughtful novel, and not an environmentalist parable. But every time this domestic drama gets going, the moralising quickly works its way back in, especially after Dellarobia joins up with the scientists and becomes a field assistant.

Much of the dialogue between Dellarobia and the lead lepidopterist, Ovid Byron, reads like the narration from a 1960s high-school film strip, as Byron gently makes the same point again and again about the butterflies' life cycle: ''Climate change has disrupted this system.''

Byron tries to get more locals to work with him. But Feathertown is a place so far removed from civilization, Kingsolver would have us believe, that it doesn't have a single college-bound high-school pupil willing to volunteer for his project.

From Byron, Dellarobia learns that if the butterflies don't survive the Tennessee winter, they could become extinct. She tells her husband, but he won't stand up to her father-in-law, who wants to sell the Turnbow family property - and its precious, butterfly-sheltering trees - to a logging company. Eventually, and inevitably, Dellarobia's contact with reasonable and educated outsiders changes the way she thinks about herself, her children and her marriage.''

It's because of all that business up the mountain. I wish they'd never lit down here.''

In the end, Dellarobia has to decide whether a smart, nature-loving woman can live among the unenlightened and stay true to herself. Given the less-than-sympathetic portrayal of Appalachia in Flight Behaviour, few readers would blame Dellarobia if she just decided to pack it all up and run away.