‘Intern’ directors keen to get under way 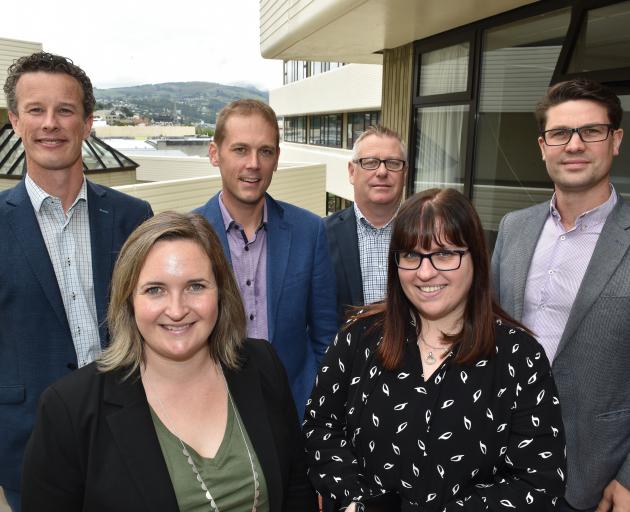 Dunedin City Holdings Ltd’s new intern directors of subsidiary and associate companies (from left) Andrew Douglas, Laura Warren, Mark Shirley, Michael Price, Christine McNamara and John Foote. Photo: Gregor Richardson
Some of Dunedin’s up and coming business leaders have been given the chance to sit on the boards of the city’s major subsidiary companies such as Aurora and Dunedin International Airport. Business reporter Jacob McSweeny spoke to them.

Six new ‘‘intern directors’’ have been named to sit alongside boards of Dunedin City Council’s subsidiary and associate companies.

Candidates were interviewed about where they would like to operate as shadow directors and what they could bring to the position.

The 18 month internships begin in January next year and will involve mentoring, a scholarship towards training with the Institute of Directors and networking opportunities from Dunedin City Holdings Ltd, the company behind the programme.

While the term ‘‘intern’’ is associated with people fresh out of study, the people chosen are often far from graduates and bring a wealth of business experience with them.

With a background in accountancy, Christine McNamara said she was hoping to take lessons learned from the airport back to Barr Burgess and Stewart, the accounting practice where she is the managing director.

“I’d like to be able to learn more skills in [governance] so that I can then use that to help my client base that I’ve currently got. But also to take those skills and use them in my future career as well, maybe for further directorships.’’

Ms McNamara said the airport, which was her first choice, had a lot of potential outside its core business.

‘‘I think the airport has lots of amazing things that it can do.

‘‘It has so many different avenues to it in terms of not just the airport itself: it’s got lots of revenue streams, the farming, rentals [and] those sorts of things.

‘‘There’s a lot going on and lots of growth opportunities with it so I’d like to learn more about how the professional board deals with those.’’

The current director of people and culture at Otago Polytechnic, Laura Warren did not expect to end up on the board at Delta.

“I know they’re responsible for some power lines and getting power to people,’’ she said.

“I think one of the things I really wanted to get out of the experience was commercial decision-making and learning something completely new.

“I think learning about a company like Delta will achieve that for me.’’

She said she had had some fantastic female mentors and hoped more women would continue to take up leadership in business roles.

“I understand that at Delta I’ll be the only female board member, so that’s going to be an interesting dynamic.

“I’m hoping to contribute — not just as a female, but I do think that is a motivating factor.

“If one of the aims of the programme is to grow the governance talent pool here in Dunedin, then that’s got to have females in it. I think we’ve got to do more to support women in these roles.’’

The value in trees and forestry is pretty clear to Mark Shirley, the current chief executive of Southern Rehab.

“I really like the concept of the environmental sustainability part to it. It’s got a recreational part to it.’’

He said the way the company grew over the long term also interested him.

“The bit that really came through to me when I met up with John [Gallagher] who’s the chair of it ... is that it’s an intergenerational asset.

“He was very complimentary of stuff that’s been done in the past that’s set up the great things that they’re doing now ... leveraging off that legacy to see whether or not there’s something to add value to for the next generation of people.’’

There was some crossover, Mr Shirley said, as Southern Rehab did a lot of work in occupational health as well as health and safety, two major concerns for forestry workers.

Despite choosing another of the subsidiary companies, John Foote, who is an expert in business intelligence, was put on the board of Aurora.

‘‘It’s definitely going to be interesting.’’

Mr Foote, who is director of Foote Consulting, said he had some experience with utility companies, but there was a lot he hoped to learn.

“I’ve worked a lot in utilities from a business intelligence perspective, so helping utility companies develop and build their reporting in data analytics.

“I’ve got an external consultant’s perspective inside the electricity field,’’ he said.

‘‘I bring that but obviously from a board and governance perspective, it will be a lot of learning, a lot of new stuff for me.’’

Who better to get to help run a stadium and other venues than a man steeped in sport?

‘‘I have naturally taken on a few roles over the last few years — president of the football club,’’ said Andrew Douglas, who has been president of Dunedin Technical AFC.

He was also the owner of Opportune Consulting, a risk and audit practice in Dunedin.

‘‘I imagine the stadium will be quite different to your regular business on the street.

‘‘I know running a football club you have to apply a different mindset than just to my clients and my day job. Hopefully, that will be helpful.’’

Douglas said the stadium brought a lot to the wider city economy.

“[I’m] really looking forward to it. I think they’ve got a great bunch of things happening there. It’s a pretty important city asset on a good journey.’’

As a general manager with Delta, Michael Price is already familiar with another of the city’s holding companies.

He said being on the board of Dunedin Railways was an exciting prospect.

‘‘I’ve had an initial meeting with the board, chair and CEO.

‘‘There’s some exciting challenges in that business, which I’m looking forward to being a part of.’’

‘‘I’m just early in my governance career. Long term I’d like to obtain a number of directorships,’’ he said.

He had also completed the Institute of Directors course and he had been on several boards of trustees at schools.

‘‘This is really first endeavours into learning off a commercial board that will hopefully give me some good skills and experience in the future.’’

I can’t think of a worse idea that trying to align up and coming business leaders with Dunedin’s major subsidiary companies under the auspices of good governance. First and foremost, most of the city’s companies’ directors use their position as director to network and obtain other similar positions throughout the country. For example. Dunedin airport has two directors. One director is also listed as the director of 9 other corporations while the other is listed as the director of 4 other companies beside the airport. Ive looked at the other city entities and its the same. They all do this because they get paid. For example, last year Dunedin City Holdings paid one of the airport directors over $60,000 to be a director of 3 of Dunedin’s subsidiary companies. If you are the director of 9 companies how can you devote adequate time to any 1 company? You can’t tell me that any of these directors are so talented that their expertise is needed on 3 of the other cities’ subsidiary companies! It's all a sham! Its nepotism at its finest which is what you will find across all of Dunedin’s companies. The same people as directors and shareholders. We need new people who haven't been tainted!

Typically, one does not use the terms good governance and DCC in the same sentence! The usually are at opposite ends of the spectrum. Given all the problems and debt associated with each of these companies I don’t think it’s a good idea to use any of these companies for internships. Dunedin already has problems with illegal and unorthodox business practices that are specific to Dunedin. We want “New Blood” bringing fresh ideas along with honest and integrity to city governance. Last thing we need is the existing bureaucrats corrupting these young minds. Everybody is sick and tired of the status quo. We need a competent and responsive local government so we can get the best qualified people running its businesses. We don’t have that now! Its friends hiring friends as favors and it needs to change!