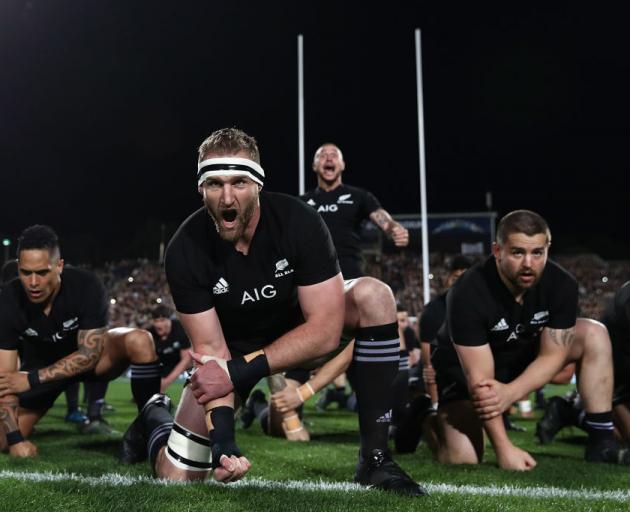 The All Blacks are aiming to win the Rugby World Cup for the third time in a row in 2019. Photo: Getty Images
Less than seven weeks out from the Rugby World Cup, Spark says it is offering New Zealanders as many opportunities as possible to watch the tournament, including through 150 rural schools.

The telco turned broadcaster has been addressing concerns that fans in rural areas may not have good enough internet to watch the All Blacks in Japan in September.

Spark Sport head Jeff Latch said today that, while the company chose the tournament to bring tech laggards into the world of streaming, it had also registered 150 schools to show the matches for nothing.

Latch said the Government's fibre-in-schools programme meant that all schools had access to good internet.

Last month, he announced a surprise partnership with Sky Sport to allow commercial parties better access the sporting event. That partnership allows pubs and clubs to access a pop-up channel through their Sky TV decoders. This is in addition to Spark's original plan to have pubs and clubs stream the tournament and charged the same price as consumers.

The tournament package price is currently $59.99 under super early bird pricing. That will increase in early September to $79.99 and $89.99 in the days before the tournament.

Latch said uptake of the commercial subscription was going well but "there are still some pubs and clubs that can't sign up either because of where they are or because they have technical issues, such as hotels that can't get it into every room."

Despite its marketing campaigns, the phone and internet company still expects about 40% of viewers will sign up in the fortnight preceding the tournament.

Rob Berrill, Spark's head of physical infrastructure, explained there would be a seven- to 35-second delay from Japan into New Zealand living rooms.

He said infrastructure had been upgraded, but would not say how much was spent upgrading CDN nodes and domain name servers, except to say the money came from Spark's business-as-usual budget for 2019.

The technology executive says capacity would not be the constraining factor for the tournament. The company had run through many simulations, but he admitted there was no way Spark could "simulate this in a live event with New Zealanders."

"There is just not another compelling event like the Rugby World Cup."

Spark is using US company iStreamPlanet as its technology partner.