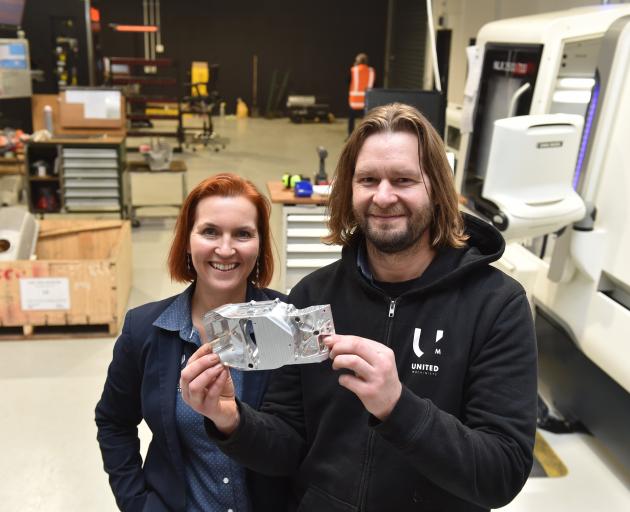 Sarah and Alex Ramsay show off a CNC-milled component in their new factory room at United Machinists in South Dunedin. PHOTO: GREGOR RICHARDSON
After spending $2.3 million on new equipment, United Machinists bosses Alex and Sarah Ramsay could be forgiven for sweating a little when work orders dipped perilously low after the lockdown.

The Dunedin engineering workshop, which specialises in "Computer Numerical Control" [CNC] milling and turning, is now home to two new machines they say will greatly improve their efficiency when it comes to production.

The Mazak Variaxis I-300 work centre has a 40-pallet work-changing centre as well as a 265-tool holding capacity. It can operate for 48 hours of "lights out" production.

"In other words - we can now make one as cost-effectively as a run of 100 - perfect for our high-tech and low-volume client base," Mrs Ramsay said.

The other machine is a Mazak Integrex J200S twin-spindle multitasking work centre, which is able to make micro to medium sized mill-turned components.

Those two machines cost $1.7 million and the new factory room they are housed in was another $600,000 for which the company received $520,000 from the provincial growth fund.

The new factory room - which has been added to the side of their original building - is temperature-controlled and ventilated, allowing them to create high-precision components, typically needed for medical grade products.

Mrs Ramsay said staff were now back at 100% of pay after spending a while at 80% when work orders were down after the lockdown. They had expected to have to stay on 80% until March next year but work had perked up.

"We never quite ran out of work but it was pretty scary. And we’re back up getting pretty close to our pre-Covid target of 1500 hours."

Work that was destined for places like China was starting to be done here.

"We are seeing that companies are on-shoring production and we are in the front seat for that."

What a great example of good sensible investment by Government. Good luck to this couple and their workers.
Also a glaring comparison to some multi-millionaire to restart bungy jumps in Singapore and Australia and a couple in NZ.