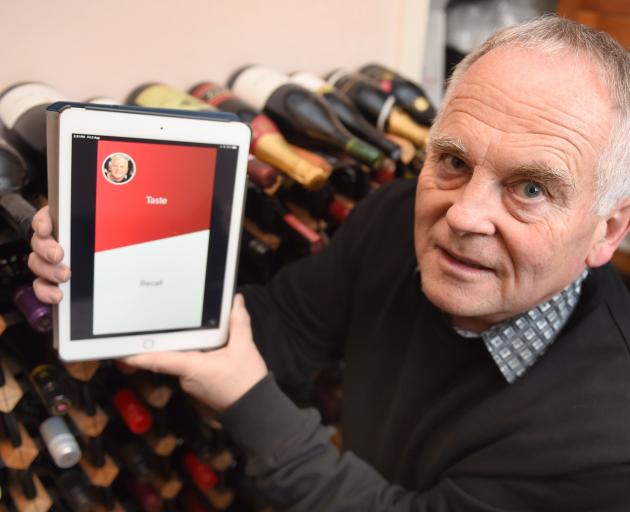 Ricky Collins displays the Wine inMind app which he has co-founded.PHOTO: GREGOR RICHARDSON
Two senior entrepreneurs and a young software engineer have combined to solve a common problem - how to choose wines wisely.

In 2013, Dunedin's Ricky Collins and Henk Roodt met through fellow acquaintances and found they shared a love of wine.

Dr Roodt had been a wine enthusiast for many years, while Mr Collins had been a wine writer for more than 20 years and a co-winner of numerous tasting competitions both in New Zealand and Australia.

Mr Roodt's son Jan-Dawid, known as JD, was a software engineer now based in Melbourne who had spent two weeks working for Apple in the United States.

Over coffee, the three decided to work together to build an app to help people keen on wine taste and rate wine themselves and be better placed to choose wines wisely.

The app enabled people to learn how to taste wine in a very simple but consistent way. It came up with scores, using an algorithm to do that, Mr Collins said.

If someone was in a supermarket looking for a bottle of chardonnay and wanted to know the cheapest varieties with the highest scores, it would sort them.

And if you were not comfortable rating your own wines, then you could tap into what others had found.

There was "some really cool science" behind Wine inMind, and the alogorithm had been built using Dunedin-founded software company 1000Minds, which produced an online suite of tools and processes to help individuals and groups with their decision-making.

The app was also quite visual, and Mr Collins' intention was for it to be a fun way for young people working in hospitality and tourism to learn the basics about wine so they could then answer questions.

He loved being part of the Senior Entrepreneurs group, saying it was a good network of people who all fed off the experiences of each other.

Aside from the app, the creators had gained "invaluable" experience they could apply to their own work and businesses.

JD Roodt now had a tangible example of what he was capable of producing in the tech environment and a base to build additional decision-making apps from if he wanted to.

Dr Roodt's business, Stone ToStars Ltd, would manage the app and Mr Collins had incorporated it into Keen on Wine, the wine appreciation and education side of his business Good Decision Ltd.