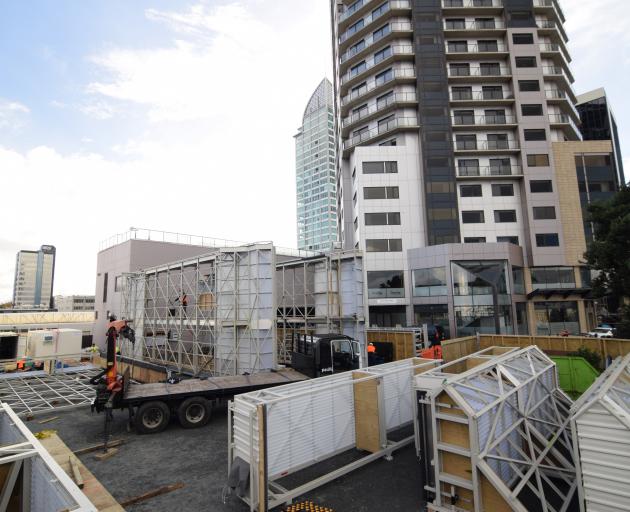 Farra's High-Riser climbing work platform encompasses all sides of a building, two storeys high, and ''climbs'' wires suspended from multiple davits on the building's roof, using a combination of a hydraulic ram and specialist wedging system, which locks on to the wire cables.

Farra chief executive Gareth Evans said while marketing had not been done on the High-Riser, there was already interest across New Zealand and Australia.

''We've had very positive responses. Our markets will be the Middle East, Australia, the United Kingdom and here,'' Mr Evans said.

He predicted that within two years Farra could be taking annual orders for five to 10 High-Riser units, which can take up to a year to build and employ up to 25 staff at times.

''It's a fully enclosed unit and set up for recladding buildings,'' he said.

The 24-storey Grenfell tower tragedy in London in June last year killed 72 people after external aluminium cladding caught fire, prompting building owners world-wide to consider recladding their buildings when many examples were found in the UK, Sydney and Auckland.

There are 13 buildings around Auckland, and others under scrutiny, identified as being clad in combustible material, which likely would require replacing.

Farra's first more than $1 million unit is being assembled at Auckland weather-tightness affected apartment block Spencer on Byron this week and should be operational within a month.

Each of the four sides of the unit on the Spencer on Byron building is almost 20m long, by 7m (two storeys) high and 1.1m wide and once in place is ''clamped'' to the building.

Mr Evans said aside from better safety aspects for workers and pedestrians below, the unit was enclosed which meant weather did not interfere with work programmes.

The 17-tonne unit is rated to carry eight workers, with a combined payload of workers, tools and materials of 1 tonne; or 125kg per worker. Each side is hung off two davits on the roof; eight in all.

The Spencer on Byron will have all its external cladding, joinery, windows and balcony doors replaced, by Brosnan Construction, which bought the inaugural High-Riser.

Mr Evans said the traditional use of scaffolding had become expensive and had a large ground footprint, while alternative ''mast-climbing'' work platforms were small, although most were not fully enclosed.

Each High-Riser unit is bespoke for the building, and can take up to a year to build, potentially being on-site and attached to the building for up to two years.

''This is the first time it will be used on a major construction unit, letting them work on two storeys at a time,'' Mr Evans said.

He said Farra solved some technical problems on the project by looking at specialist rock-climbing equipment and the technology employed on jack-up oil rigs.

''What sets this apart is the safety factors for workers and people walking underneath and its productivity in all weathers,'' he said.

Farra has for more than a decade carved out a niche-market in designing and constructing ''building maintenance units'', much smaller working platforms which are slung from permanent cantilevered davits on the top of high-rises, for maintenance and cleaning purposes.