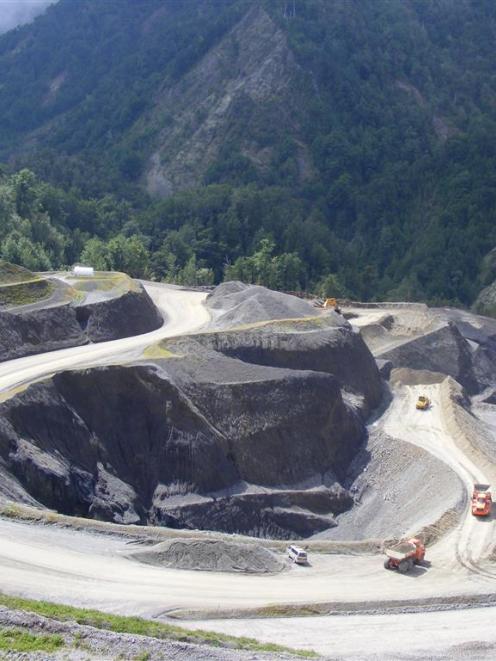 Suspension of Escarpment and its 35,000-tonne annual production is a blow for Bathurst, which is left to rely on cashflow from only two small domestic South Island thermal coal mine operations.

While Bathurst obtained consents to mine Denniston from two local councils in 2011, environmental groups, including Forest & Bird fought those consents through several courts, over two years.

By the time the Environment Court upheld the consents in October 2013, the global coal price had fallen through the floor and made mining the specialist hard coking coal unaffordable for export.

From about 2010 to 2014 Bathurst had spent about $300million preparing to mine around the Denniston plateau and fighting the legal objections to its consents, but in February 2014 the price slump prompted suspension of most plateau development.

Bathurst shares hit a record high of $1.74 in April 2011, but almost five years on, they were yesterday trading at just A1.7c; having withdrawn to a sole listing on the ASX to save costs.

Bathurst chairman Toko Kapea said on Friday the main market for the 35,000 tonnes of Escarpment coal was Holcim, near Westport, which plans to close in June.

Following an operational review of Escarpment, Mr Kapea said it was ‘‘envisioned that the mine would be placed in suspension at the beginning of May''.

‘‘The costs inherent in operating on the plateau and the overhead required to support even small scale mining is onerous,'' he said in a statement.

The mine was once envisioned as employing 400 people and building towards taking up to 4million tonnes of coal annually.

Bathurst's board numbers had been gutted during the past 18 months, and fewer than 100 remaining staff may be cut by about 20.

Forest & Bird campaigns and advocacy manager Kevin Hackwell called for Bathurst to surrender its access rights and resource consents covering the Denniston plateau, which he has always maintained was ‘‘high value conservation land''.

Forest & Bird had fought for many years to protect Denniston, which was a unique landscape and ecosystem, formed under unusual conditions over tens of millions of years, he said.‘‘Coal is a dirty form of energy whose time has passed.

‘‘We now need to give the whole of the Buller Coal Plateau the protection it deserves by adding it to [highly protected status] Schedule 4,'' Mr Hackwell said.

Mr Kapea said in his statement Bathurst planned to maintain the resource value and also the existing consents, which allowed access to the coal resource.

‘‘The intent of the company is to continue to compete for other markets for this high quality coal.

‘‘The resource is still available to mine and there is a scale where it is profitable,'' Mr Kapea said.

On the question of Bathurst's financial position, Mr Kapea said said the remaining Bathurst business was ‘‘strong, with positive cashflow''

‘‘This hiatus in operations strengthens that position in these difficult market conditions,'' he said.

Bathurst's Takitimu mine, in Southland, and Canterbury Coal, near Christchurch, have contracts to supply dairy plants.

With coal price still in the doldrums, for Bathurst's year to June 2014, it posted a loss of more than $189million, having written down the value of its Buller Coal Project by $450million.

Bathurst achieved a minor half-year to December 2015 turnaround, replacing the previous year's after-tax loss of $7.1million with a $142,000 profit. For the period, its three mines produced about 400,000 tonnes of coal.

Bathurst's operating cash flow for the period $3.2million, compared a $2.2million outflow the previous year, while bank debt was down to $2million.

Mr Kapea said site works up until May would centre on forming stable slopes and water control structures, so the mine met all its resource consent decisions, in a safe and cost effective manner.

Mr Hackwell hoped Bathurst's decision to close the mine would discourage the Department of Conservation from approving any other coal mining on high value conservation lands.‘‘The cost to nature is too high,'' he said. - Additional reporting: nzresources.com