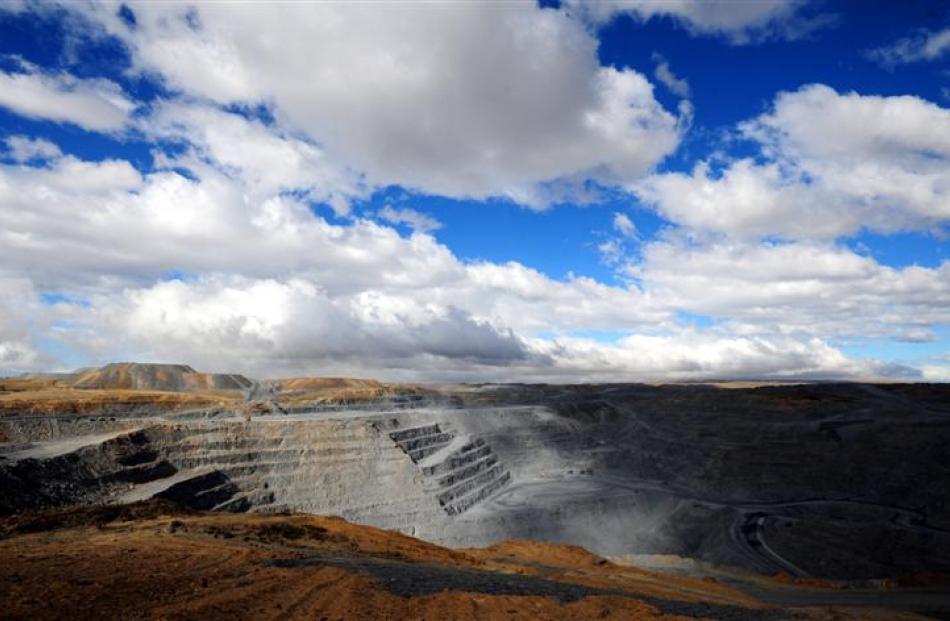 Oceana Gold is one of the companies mining in New Zealand seen with a positive outlook. Photo by Craig Baxter.

Delegates attending the influential Institute of Mining and Metallurgy conference in Queenstown were upbeat about New Zealand's prospects. Business reporter Simon Hartley wraps up the conference.

China's prosperity holds the key to the fortunes of many in the resource sector in the year ahead but positive change is afoot for many in the industry as high profile companies edge closer to production.

While the economic turmoil of the United States and Europe temporarily crushed commodity and metals prices in the short term, and sharemarkets' volatility slashed billions of dollars in share values from start-ups and juniors through to the giants, exploration and production continues.

"Upbeat and positive" is how many of the almost 300 delegates attending this year's New Zealand branch of the Institute of Mining and Metallurgy (AusIMM) 3-day conference in Queenstown see New Zealand's status.

Last year, the conference had to watch in despair as the Pike River Coal tragedy unfolded on television specials and personal texts. The Queenstown conference this year had plenty of cohesion, and many could look forward to a year of "business as usual", in spite of financially explosive times.

China's double-digit growth in recent years may well be heading south to "merely" 6-8%, but according to conference co-sponsor Michael Lim, global head of structured trade finance for the ANZ, this will be enough to sustain Western economic growth.

New Zealand is involved with Australia as its biggest export destination, while the lucky country, via mining and metals, is now heavily reliant on China's demand.

AusIMM New Zealand branch chairman Cam Wylie said domestic companies had to look beyond "business as usual". He predicts a global metals surge from 2012 to 2014 and says companies should be targeting this period to hit peak production and peak prices.

Oceana Gold was a case in point, with company secretary Matthew Salthouse outlining yesterday how it had amassed $320 million in three capital-raisings since mid-2009; a period when debt markets were reluctant to lend. That capital allowed Oceana to buy back its entire hedge book, leaving it to make the most of selling its gold on the spot market and its record prices. The remaining cash will go towards New Zealand exploration and re-ignition of its Philippines gold and copper mine, scheduled to begin production by the fourth quarter of 2012.

Mr Wylie said metals markets were not being driven any more by debt-laden countries, but instead by "saving" countries such as China and India - where the populace was moving beyond the poverty line, creating demand for bicycles, cars and the copper wires needed by the telco sector.

"Now is the time for [mining] companies to be considering low-grade mineral deposits, with prices expected to push towards peaks in the near future [2-3 years]," he said.

Companies such as L&M Group and its spin-offs are all being watched expectantly this year for firm progress in its Southland coal seam gas exploration and pilot studies.

Solid Energy is due to begin construction of its boutique $25 million lignite-to-briquette plant in Mataura and Bathurst Resources could start its coking coal production by December.

Solid Energy remains bullish about lignite conversion to briquettes and also the multi-billion-dollar projects for diesel and fertiliser conversion. While claiming they will all be carbon-neutral products , under the emissions trading scheme, just the use of the low grade sulphurous lignite will become an environmental flash-point.

As projects apply for, and gain, resource consents, environmentalists are becoming more organised, better educated and are capturing the public attention.

The schedule four debacle of two years ago, which saw the National-led Government forced to flip-flop on a proposal to explore specially protected conservation land, was proof the public should be able to have its say and be listened to.

Cynics will decry any comment on the mining sector, supposedly acknowledging a new level of transparency and community inclusion.

But at this year's conference "community engagement" gained more than lip service.

Mr Wylie said the time was now paramount industry engaged with not only communities but also anti-mining environmentalists"Whenever a project has stalled, it is because of failing to engage with a community, not a technical issue."

Mr Wylie conceded it was noticeable there were no other points of view available to the AusIMM conference and it was now time that environmentalists were invited, to publicly put across their message,"If there is an information vacuum, then someone else will step in and fill it. We need to get out there ourselves," he said.

There was a recognition involvement of communities, landowners and other stakeholders as soon as possible could reap long-term rewards, while behind the scenes proposed reviews of Acts and statute laws provided the sector with further hope.

"The industry has to earn its place in New Zealand society. We are patently not and must communicate better ... we want to bring New Zealand along with us," he said of the potential economic benefits and jobs.

Unlike Oceana Gold, which is relatively out of sight in East Otago, but still maintains community relations, sponsorship and public programmes, the New Zealand subsidiary of global giant Newmont is literally a neighbour in the small historic township of Waihi.

Newmont is targeting a worldwide increase in gold production from more than five million ounces to about 7.5 million next year. Its stake in Waihi and the annual average production of 100,000 ounces since 1988, barely seems worth the trouble.

However, Waihi is a showcase for Newmont of how well mining works in with local communities. Its latest projects include a new underground mine, which will eventually replace the existing Favova on the town's outskirts. The new tunnel is directly below about 30 homes at depths from about 130m to 350m.

With the likelihood in the future high for companies to make discoveries in and around established communities, Waihi shows how industry and the community can strike a balance.

Economists and analysts, acting Minister for Energy and Resources Hekia Parata and finance sector representatives all highlighted Bathurst Resources and Newmont as examples of achieving a good economic outcome while including local communities.

The conference was told there was no likelihood the Government would risk creating another furore over an ill-timed and badly presented policy release with less than three months to a general election.

Had she taken the "do nothing" option, it would have been at least acceptable to the mining sector, which still regarded Labour as anti-mining in stance and outlook.

Ms Parata noted submissions and subsequent appeals on resource consent applications which could be deemed "vexatious and frivolous" may be thrown out; which will show the mettle of both the Government and green protagonists.

Should National be returned in November, many AusIMM members were confident policy changes affecting the Department of Conservation and a review of the Crown Minerals Act would herald a more open-minded and workable system.

• Simon Hartley attended as a guest of AusIMM