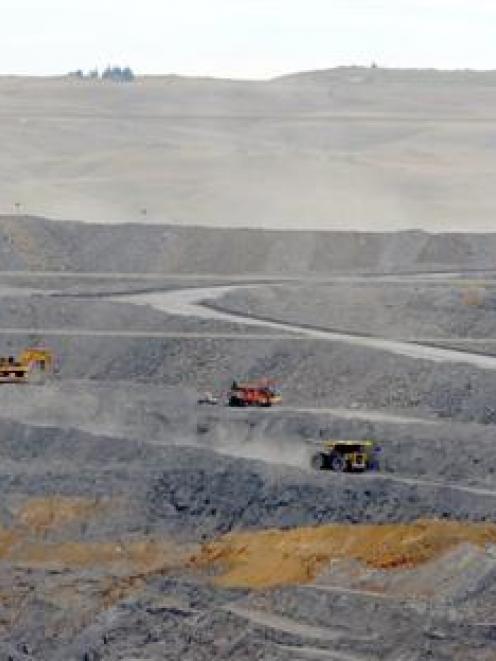 Oceana plans to progressively cut production at Macraes mine as it ramps up lower cost mining in the Philippines. Photo by Craig Baxter.
The new year could herald the beginning of the end of Oceana Gold's New Zealand operations, with the winding down of some West Coast and Otago production.

Oceana's mainstay Macraes mine in East Otago is entering its 25th year of operation in 2015 and has yielded about 4 million ounces of gold, but it is being priced out of contention by the relatively new Didipio gold and copper mine in the northern Philippines.

During the past 18 months, to counter a weakened global spot gold price,

Oceana has redesigned its mine operations, shortened mine life expectations and laid off more than 250 New Zealand staff.

Last January, Oceana chief executive Mick Wilkes said that because of the continued low price of gold, the Macraes open pit had a mine life until the end of 2017, while

mining would end at the Frasers underground mine in mid-2015, and at Reefton at the end of 2015.

''The new life-of-mine plan has resulted in a reduction in the gold production over the remaining life of the Macraes assets,'' Mr Wilkes said.

What hasn't been spelled out by Oceana are its intentions for the Coronation pit northwest of its Macraes site, which was granted 17 consents for 35 years in December 2013.

While some believe Coronation will merit a formal mine-life extension and the 5km road to the site has been completed, about a million tonnes of overburden would need to be removed.

The Coronation site is understood to be relatively low grade ore and it is uncertain to what extent it will cushion the overall mine mothballing.

Coronation pit covers about 62ha and the neighbouring waste rock stack 105ha, along the divide of the Shag and Taieri Rivers, between Sister Peaks and Highlay Hill.

Oceana Gold shares have reflected gold's spot price volatility during the past two years, recovering from being one of the worst performers on the NZX to claw back 60% in value this year, hitting $2.65 in mid-October to be the top performer. Its shares last traded at $2.20.

''We expect output from Didipio to exceed [calendar] 2014 guidance and highlight increasing gold production into 2015,'' he said.

''[However] unless Oceana announces an outstanding piece of geology, 2017 looks like the end of it at Macraes,'' Mr McIntyre said.

Forsyth Barr broker Andrew Rooney also emphasised Oceana's low production costs and that it was continuing to deliver from both its Philippine and New Zealand operations.

''In addition, Oceana has good upside [positives] from its exploration opportunities, particularly in the Philippines,'' he said.

Mr McIntyre said no changes had been made to the operating assumptions for any of Oceana's assets; a revised commodity price and currency forecasts had increased the valuation of Macraes and Reefton.

''However this is mostly offset by the impact of weaker currency on the hedge position.

Mr McIntyre said there were several key negative risks to be considered, including major variations to production and costs, operating risks of open pit and underground mining, potential changes to Philippine mining law and regulation, and wage inflation in the Philippines or New Zealand.

Mr Rooney said Oceana's technical and economic reports on Didipio were ''encouraging, but maybe a little too upbeat''.

Oceana wants to bring forward development of the proposed underground mine by a year, and take it deeper, which would bring forward gold and copper production and reduce open pit waste by 68 million tonnes.

While estimated gold and copper reserves would rise, Mr Rooney said capital expenditure over the life of Didipio would appear to have increased by more than $US100 million, meaning the net value would be nil.