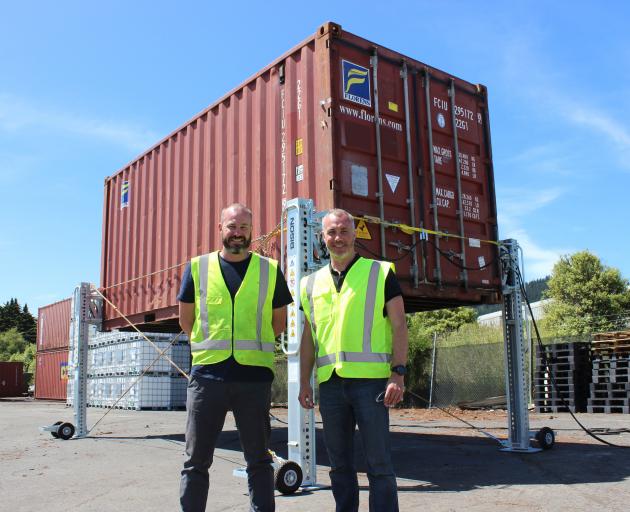 Otago Export Awards winners Greg (left) and Mark Fahey, founders of Dunedin-based Bison Group, in 2014, with their innovative container lifting solution. PHOTO: SUPPLIED
Bison Group has emerged ahead of the herd to take the supreme award at the inaugural Otago Export Awards.

More than 140 guests representing a cross-section of Otago's brightest export stars attended last night's awards function, held at the Catacombs in the Octagon. The event, hosted by the Otago Chamber of Commerce in partnership with New Zealand Trade and Enterprise (NZTE), was launched to celebrate and showcase Otago businesses and their work in opening up international markets for New Zealand products and services.

"Otago is a major player in that space so we are extremely excited to have been able to highlight Otago's `best kept secrets' and help tell some great business stories."

He said the judges had a tough job in identifying the finalists from a class act of entrants.

"The process was very robust and our thanks go to the judging panel who invested a lot of time into the process."

In the end, Bison emerged as a clear judges' favourite. They had a busy night on the way to the top accolade, scooping the award for best emerging international business and also featuring as a finalist in the excellence in innovation award. The latter was won by NZX-listed cancer diagnostics company Pacific Edge while promotional products company Tuapeka Gold Print picked up the best medium/large international business award.

Bison is a Dunedin-based tech company, founded in 2014 by brothers Greg and Mark Fahey. Over the past five years the company has developed a strong international niche in the portable container scale market, with demand from major multinationals and even international military customers, including the United States Air Force.

Judges commended the company for what they called its "cohesion between innovation and commercialisation".

"It's rare for a company to identify a genuine gap in the market and execute the opportunity effectively," judge Che Bliss, of NZTE, said.

Pacific Edge was described by the judges as a "truly remarkable company that have taken on the big boys" to the benefit of a large number of patients, while Tuapeka was described as a "super star performer and an important contributor to the local economy," demonstrating an ambition to continue to grow into the number one market position in Australia.

Basil Goodman, founding chairman of co-operative Seasonal Solutions, was announced as the winner of the unsung hero award.

"He filled a desperate need for employment through South Pacific connections that led to wider connections. As a result of his work, Central Otago is emerging as a significant provenance story that represents best farming practice and high-quality produce," Mr Bliss said.

The Otago awards are aligned with the NZTE international business awards, which means the three main winners would be shortlisted for the NZTE International Awards.