By Jacob McSweeny
11 Comments
Sophie Barker sits on two sides of the Octagon closure debate; on one hand she is a councillor, on the other she helps run a tourism business that has had a distinct downturn in bookings since the city centre closure was put on trial.

The Otago Peninsula Trust marketing manager said bookings for the Royal Albatross Centre through the i-SITE in the Octagon were down 44% two weeks ago and 39% last week.

"A lot of our business comes via the i-SITE ... it’s a huge and serious concern for us," she said.

The number of cruise ship passengers has been up by almost half during the time of the Octagon closure.

But Ms Barker said she was more concerned as to what was happening to the 90% of visitors to Dunedin who were not cruise ship passengers, those she described as being a FIT [fully independent traveller] or part of a tour group.

Her theory was they were, for some reason, put off from getting to the i-SITE, which sits near one corner of the Octagon. 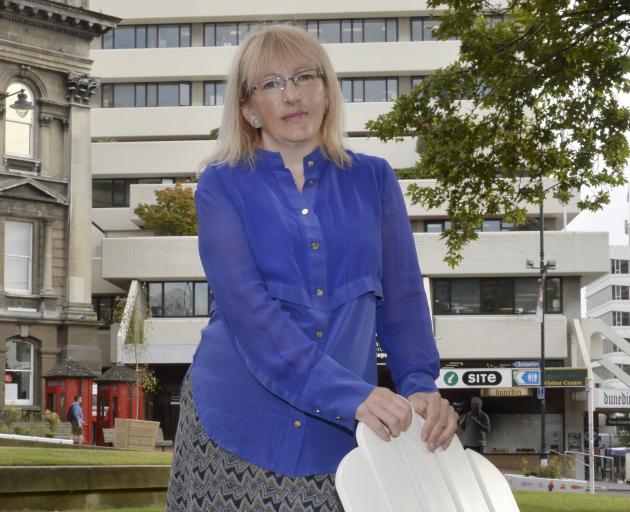 Sophie Barker said the recent downturn in bookings at the Royal Albatross Centre lined up with the time of the Octagon closure. PHOTO: GREGOR RICHARDSON
"That’s my concern is they’re not coming into the i-SITE and not booking.

"Because there is no other reason really, for our bookings to have fallen so dramatically - this is the only thing that has changed.

"If they can’t park or they can’t walk, if they can’t find the way. In all of our information and brochures we’ve invested heavily in promoting the i-SITE as a place to book. If they can’t make it here, what are they going to do?"

The organisation had only last year increased spending on wages and marketing, which meant it was now going to feel the pinch from the reduction in bookings, Ms Barker said.

The organisation had recently employed its bus drivers as fulltime workers, rather than contractors.

"We’ve also put all of our staff on living wage, which was a huge leap forward for us but we also had very, very tight budgets to be able to do this so we’re incredibly stressed by the ability to carry on the business and pay our team during that time."

It was unlikely the effects of the novel coronavirus or bad weather would seriously affect the number of people booking through the i-SITE, Ms Barker said.

"We’ve had a few cancellations because of coronavirus. That would be some of the forward bookings, not the bookings in the last couple of weeks."

As a councillor, she was now aware of how important the Octagon was for a lot of Dunedin businesses.

"I will be very interested to see the statistics [of the Octagon closure]," she said.

"First of all, there should have been good consultation at the start. Maybe people aren’t understanding how much business has come through the Octagon, how important it is to everybody.

"We all invest way back six months before the season starts, into stock, into staff, all that kind of stuff and to have a shock like this is really hard."

But she said she would not be surprised if the Octagon closure became permanent.

"There’s a lot of people that support the Octagon closing in some form.

The council was approached for comment but has yet to respond.

So glad we have such deep thinkers on the DCC! Really reaffirms my trust in government. The only thing Barker's comment have done for me is reafirm the importance of the internet as an alternative to wasting time and money shopping in Dunedin. You can do whatever you want to Dunedin, it's not like we have a say.

It's true to say that the bookings are down since the closure but as this period also covers the Chinese flight ban surely that will have had the biggest impact.

I do believe you need to read a bit more into the article before commenting, yet again. She has clearly stated that there would be been a small number of forward bookings cancelled.
Stop cherry picking facts, all just because you obviously hate cars and small business

I know that you don't know me at all but just for the record I own a small business and a car and hate neither of them. I also used to be a guide at the Royal Albatross Centre and when I worked there the bookings from the I-site made up a small part of our overall turnover, most people booked direct with us in those days ('04-'06). But of course things change over time, like the pedestrian experience in the Octagon.

Listen to the people who know what the closure of the Octagon has really meant.

MS Baker Congratulations you have now levelled up and much respect. I suspect now you have spoken out against your leaders dreams - that the same bullying allegations will start like they have done with Cr Lee Vandervis. I suspect this was when he was away opening that 'Climate-safe house' Good on you much respect, lets hope some other councillors stand up and openly discuss the facts and how it is.

A lot of people at DCC, both councilors and staff, just don't seem to get the idea that many people will simply not walk 2 or 3 blocks to do business. That includes shopping or eating. No one is going to park a car and walk 2 blocks to get a coffee on the way to work. Add to that the very messy implementation of the road closures and it is not at all surprising that any business in that area suffered a major drop of walk in trade.

It would be interesting to know what level of visitors the Albatross center had over the past month compared to other masters games years.
I am also surprised no business owner has as yet has sued DCC for loss of trade during this trial. Maybe once its all done we will see cases emerge.

Oh for goodness sakes, how many car parks can you get near to and in the jolly Octagon. Meridan mall, you can't park outside the shop you wish to vicit within the mall, they seem to do ok. As for bookings falling off at i Site and saying, "oh, there is no other reason", HELLO, Coronavirus! General tourist numbers may well be down at the moment. I've been down to the Ocyagon on a few ocaasions during the trial. Yes, I went shopping, and what a pleasure it was, and yes, people were in the shops. It's the lack of noisy traffic that gives the impression that it's not as busy. There were still plenty of people about at 2:30 in the afternoon, on a week day. By hang Dunedinites know how to moan!! Get on with it, make the changes and improve your attitudes. As for suing DCC for lack of trade, how about suing busnesses for lack of vision! Business isn't always sunshine with tourists delivered right to your door. Polluting cruise ships drop off tourists from polluting buses to buy overpriced foreign made imported products. Please explain how this is an 'attraction' and a 'Kiwi Experience'? Maybe it's time for some 'new business'? Getting sick of negative retoric.

So bookings have fallen....well duh, we know why that is.... Octagon closure any one.

The Milford road closure will have a huge effect also, probably more than the other things that are going on. If people aren't doing the loop through Queenstown/Milford and tagging on Dunedin it makes sense the last two weeks have been down. Data from this period is just too messy to use.

The DCC won't comment. Don't expect anything from them.

All they care about is their very extreme ideology - "do as we say, while we spend even MORE of your money, and how DARE you question us!!!"