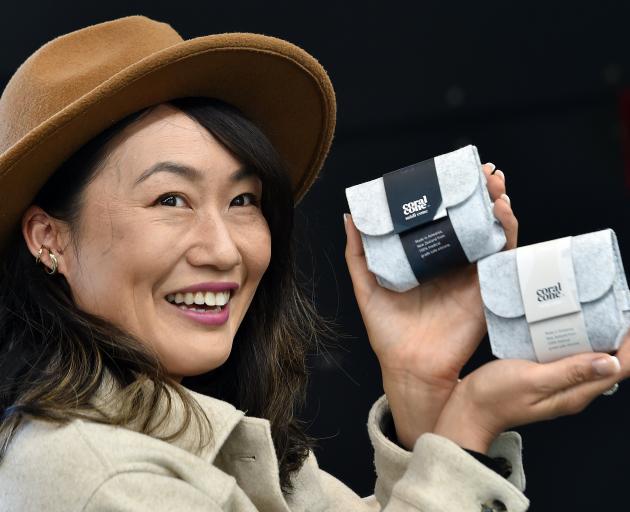 Coralcone owner Yvette Shum, of Dunedin, holds the packaging for her menstrual cups. PHOTO: PETER MCINTOSH
Yvette Shum is on a mission to make menstrual products more the ‘‘accessible and environmentally friendly’’ for all New Zealand women.

After four years of planning, the Dunedin woman last week launched her reusable menstruation cups, Coralcones, on the market.

Ms Shum began designing the cups — with help from Heather Cunningham — in 2018, just after her daughter was born.

The inspiration for the name of the cups came after volunteering for a project in a coral reef in a small group of islands in Indonesia.

Any person who menstruated created about 200kg of waste over their lifetime and most of that ended up in a landfill, Ms Shum said.

The development phase took a while because Ms Shum wanted to make sure they got it right.

‘‘We really wanted to put our money where our mouth is, so we needed to get it right,’’ she said.

Ms Shum took part in Startup Dunedin’s incubator programme this year — which she believed gave her the necessary business skills.

‘‘It gave me momentum and the support I needed to get going,’’ she said.

So far Coralcones — which were manufactured in Waikato — were only available online, but Ms Shum wanted to expand to selling to wholesale retailers and eventually internationally.

Ms Shum considered herself a ‘‘solopreneur’’ — setting up and running the business by herself.

After a busy few days following the launch, Ms Shum wants to have a few days to rest.

‘‘I have neglected a load of washing that needs to be folded and I wouldn’t mind a haircut either,’’ she said.