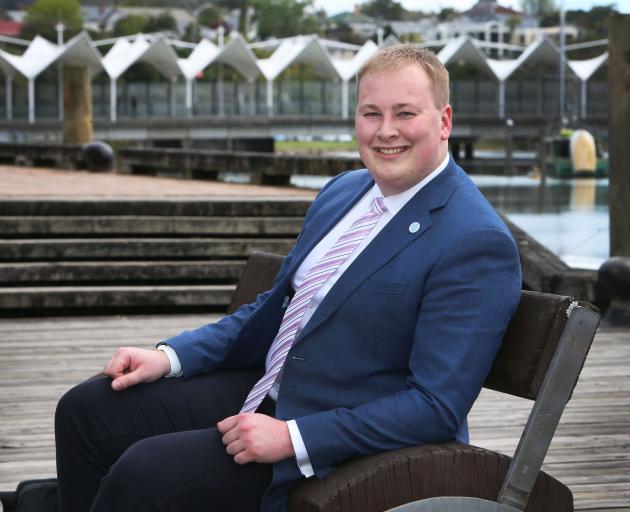 Infometrics principal economist Brad Olsen at ease in his home town of Whangarei. PHOTO: NEW ZEALAND HERALD
Brad Olsen has risen to be one of New Zealand’s leading economic commentators — breaking down the big terms for households to understand. He talks to Riley Kennedy about his path into economics and his fascination of regional New Zealand.

Brad Olsen insists he is not a nerd, but says he is pretty close to it.

Last year, the principal economist at Wellington-based economic consultancy group Infometrics set himself a goal to travel to all 67 local authorities in New Zealand with the aim of better understanding regional economies.

He completed that, and now he might start again.

Growing up in Whangarei, Mr Olsen admitted he was the kid who had a lot of badges on his school blazer —"I wanted to give everything a go".

At primary school, he put his hand up for everything, volunteering to be the librarian, road patroller, wet day monitor and PE monitor.

At the age of 8, a project to fix a polluted culvert at the school won his group an award at the Community Problem Solving championships in Michigan in the United States.

"I was a goody-two-shoes, I always wanted to fix stuff."

His enthusiasm to be involved in things did not stop at secondary school, he became the chairman of the Whangarei Youth Advisory Group.

At home, he would note down the day’s results from the stock market while watching the 6pm television news every night.

Despite "really loving" economics at school, he "never quite knew" what he was going to do next.

"I wasn’t sold on being a doctor, like some people."

Mr Olsen knew he wanted a job in which he could make a difference and help inform people to make a decision.

In 2015, he moved to Wellington to study at Victoria University.

He still was not sure what he wanted to do and spoke to the careers adviser saying he had four areas — public policy, economics, international relations and political science — he would like to study, but did not which ones to choose.

Mr Olsen ended up studying them all and graduated with a double degree — a bachelor of commerce as well as a bachelor of arts with majors in all four areas.

His university days were "very busy" as well as juggling the two degrees, he worked part time at Infometrics entering data into spreadsheets, and also was the chairman of Wellington Youth Council.

In 2016, he travelled to England to receive a Queen’s Young Leader Award at Buckingham Palace, and went to a meeting at 10 Downing St.

Three years later, he graduated from university and joined Infometrics — officially — full time as an economist.

He was already working "relatively serious" hours for the company, which Mr Olsen said complemented his academic work.

The 25-year-old now has worked his way up to become New Zealand’s media go-to commentator on all things economic.

He remembered his first media economics interview, which he recalled was on March 17, 2017.

Almost daily, he is on television, radio and newspapers talking about anything from inflation to housing and unemployment.

He believed it drove his passion for economics by helping to inform Kiwis.

"Kiwis want a straight answer, something they can understand, and that is what I try to do," he said.

He has every media interview recorded in a spreadsheet — "I’m an economist, we love spreadsheets."

At the start of last year, he travelled to the regions trying to "walk the talk" and get on-the-ground intelligence.

Economists could work from their "ivory tower" in Wellington and look at every spreadsheet under the sun to try to get a feeling of how the economy was going.

Getting there in person gave Mr Olsen a whole different view of what was happening on the ground.

"Sometimes you have to shut up and listen to understand what is happening."

Mr Olsen was challenged by his boss, after he had been travelling a lot at the start of last year, to try to get around the whole country.

Mr Olsen got to all of the district councils in Otago and Southland over two trips.

On one of his trips, he was driving through Central Otago and asked his colleague to pull over at an apple orchard they were travelling past.

There were apples rotting on the ground "for as far as the eye could see" because there was nobody to pick them.

"That is a real in-your-face example of what people are dealing with locally, which we would never see from Wellington," he said.

While the Delta lockdown slowed him down, Mr Olsen visited his final region, the Far North, at the end of November.

Two months into this year and he had already been back to 17 local authorities, including Queenstown last week, and would like to try to get back to most of them this year.

"Last year we were so rushed, so this time I’d like to book a lunch break in some places to get the full experience."

Zero chance apples were left to rot "because there was nobody to pick them" last season. Central Otago had an oversupply of pickers last season.