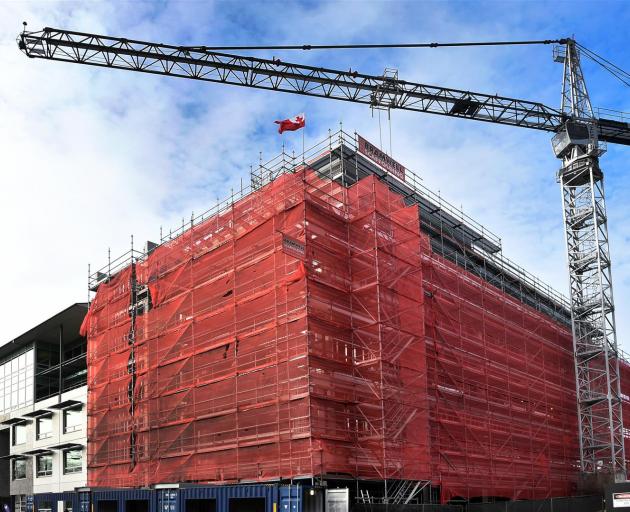 The University of Otago’s $50 million animal research laboratory in Dunedin yesterday, one in a large pipeline of construction projects in Dunedin at present. PHOTO: PETER MCINTOSH
The southern construction sector is looking strong in the years ahead, despite evidence of some softening in other regions around the country.

Economists are describing the workload as a construction boom, but some forecast a plateauing of work heading into 2020.

Dunedin's hospital, school expansions, hotels and houses in Queenstown and Central Otago and the proposed redevelopment of George St are providing a "strong pipeline'' of work, Otago Chamber of Commerce Dougal McGowan said.

"I don't see a downturn here ... but more continued, major growth over the next five years, and [otherwise] strong growth for 10 years,'' he said.

He noted also developments by the University of Otago around Dunedin.

Westpac senior economist Satish Ranchhod said total construction activity was much stronger than expected in the quarter to March, rising by 6.2%.

"That comes on top of earlier strength, and leaves building levels up 5% over the past year,'' he said.

With a large pipeline of work, construction activity was likely to remain elevated through 2019 and into 2020.

"However, with building levels now commensurate with population growth and migration easing back, a peak in the construction cycle is approaching.

ASB chief economist Nick Tuffley noted construction had "boomed 6.2'' for the quarter, and building work put in place was much stronger than expected.

"The lift in building work was led by a massive 9% quarter-on-quarter increase in non-residential building
activity,'' he said.

Mr Tuffley said activity in both the residential and non-residential sectors touched record highs and the lift in activity was also regionally broad-based.

Mr McGowan said other facets of Dunedin were also busy, including the continuing redevelopment of older properties, and projects related to underground infrastructure.

Dunedin now has a workforce development advisory group for the hospital build, to initially find 350 staff to begin the build next year.

That will increase to up to 1000 for the following phases of construction.

Mr McGowan said it was important the development group was looking at both supply and demand for the construction sector.

"We need that capacity to train and upskill into the future,'' he said.

Westpac's Mr Ranchhod said strength was seen not only in Auckland's construction sector, but outside Auckland and Wellington, where building levels in the North Island were up 11% over the past year.

And in the South Island, outside of Canterbury, construction was up 5% over the past year, from what was already an elevated level, he said.

"The only region where we are not seeing building levels trending higher is Canterbury.

"That's only to be expected with the peak in post-earthquake reconstruction having past several years back,'' he said.