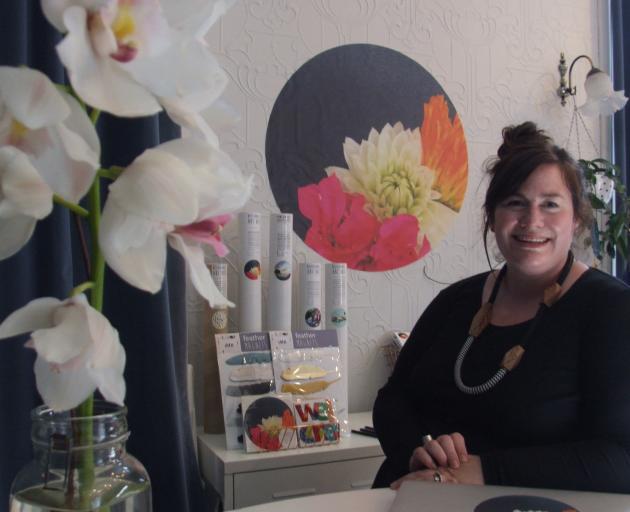 Tinch Design Studio founder Helen Riley-Duddin in the studio of her Oamaru home. Photos: Sally Rae
Helen Riley-Duddin and her husband, Michael, had it all in Dunedin — friends and business connections, and their family was well settled.

All that was missing was a larger house to accommodate their expanding family, but after an 18-month search, they had not found what they were looking for. When they fell in love with a gracious near-century-old two-storey house for sale in Oamaru, they decided to up-sticks and shift north, while  retaining their links with the city.

Two years later, the couple are well ensconced in the town, working from a studio in their South Hill home with stunning sea views.

"It has all the space so we could live and work here and we still have all our links to Dunedin," Mrs Riley-Duddin said.

The pair, who have been together since meeting in their first week at the University of Otago, have pursued very different careers.

Mr Duddin is a stock market analyst, while his wife runs Tinch Design Studio and is also heavily involved with Guild, a designers’ collective in Moray Pl, Dunedin.

The pair fit in their work around the demands of family life with their  children, Jemima (8), Rowan (3) and Sylvie, who will soon turn 1.

Mrs Riley-Duddin grew up on an organic market garden in  Kakanui. She always knew  her career would involve something creative. 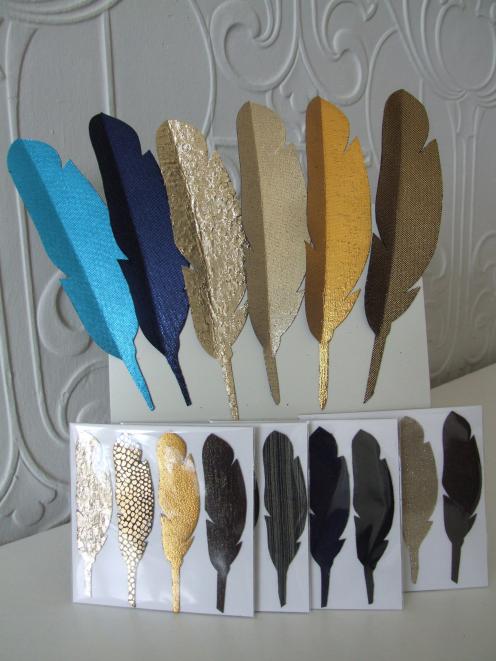 Magnetic feathers she has created.
She recalled her final year of secondary school, when everyone was preparing to head off to university and she had a list of 11 different degrees she wanted to do.

Fortunately, her parents stepped in and suggested she stay home for the year, to save money for her studies and narrow down what she wanted to pursue.

When that point came, she had worked out that it was design, while her father suggested she also do a business degree, so she completed double degrees in design and marketing.

While studying, she also had lots of different jobs. Quite early on, she  worked at Student Job Search, where she ended up as recruitment consultant for the Future Grad programme. That helped forge some good  connections with Dunedin businesses and academic staff.

While many of Mrs Riley-Duddin’s friends left the city after graduating, she always felt with a small town, you could make opportunities for yourself.

"There’s something about being in a small town or even in a small firm; you pick up extra responsibilities," she said.

When she left Student Job Search, she took some time out and did a jewellery apprenticeship. Then a job in administration came up at the design school and it evolved into a teaching research position. She had always tutored  at the university while studying, and really enjoyed that.

She left when she was pregnant with her first child, but when Jemima was about 9 months old she realised she loved her work and had to find a balance — "find that something for me", although she was not ready for full-time work.

She was always creating something and, about the same time, the couple bought their first house in Dunedin.

They were exploring what they could do to make it their "own" on a budget, using their design knowledge.She came up with designing interactive wall spaces. The couple loved art and it was also something children could interact with.

The children loved the tactile and textural nature of it and it became like visual storytelling, she said.

The Tinch range began from there, eight years ago, and it had kept her busy since, while also evolving quite a lot.

There was a range of both magnetic and restickable products that she sold around the world.

Mrs Riley-Duddin was among the five founders of Guild, which will mark its third anniversary in February. The store was run by not-for-profit entity Dunedin Designed Incorporated and the designers involved shared the rent and staffed the shop themselves.

Since its inception, Guild had grown and evolved and it had been "amazing". Dunedin Designed Incorporated was formed to do "lots of things" and Guild was just the first project, with other things to come.

Those involved had so many skills to offer and all were passionate about what they did and for the concept. It had been great working with each other, she said.

It was decided to introduce a model of pop-up guests to complement the resident designers on a rotational basis and that had proved an excellent decision. Two pop-up guests each month had brought a new feel and new stock to the store.

Mrs Riley-Duddin curated the pop-up guests and awareness had grown so much that people were now really honoured when they were asked to take part. It was an invite-only opportunity.

DDI was grateful for the support of the Dunedin City Council, which recently gave Guild a Dunedin City Service Grant. It wanted the funding to concentrate on links with Otago Polytechnic — something that had always been important to DDI — to showcase emerging designers with the aim of retaining graduates in the city, and also offering workshops.

Resident designers were offering workshops and members of the public would also be sought to offer workshops through Guild. The whole idea was to support those in the creative industry and give them an outlet to share their knowledge.

Mrs Riley-Duddin was in Dunedin most weeks and did her own designer duty at Guild every fortnight. It was a good balance between living in Oamaru and maintaining her connections in Dunedin and doing work there.

But it was an ‘‘amazing’’ house, which now highlights plenty of Mrs Riley-Duddin’s design talents, and her studio will be open as part of Kakanui School’s fundraising home and garden tour on Sunday, December 3.

With  Mr Duddin also working from home, they could "share the load" regarding the children.

They also liked their children to see them working so that they also grew up with a work ethic.

"In terms of productivity, I think when you’re happy at home and working from somewhere you really love, it’s a really productive environment," Mrs Riley-Duddin said.

Her roles with Tinch and Guild worked harmoniously together. While there were things she would love to do in the future, for now it was "just a really good balance".