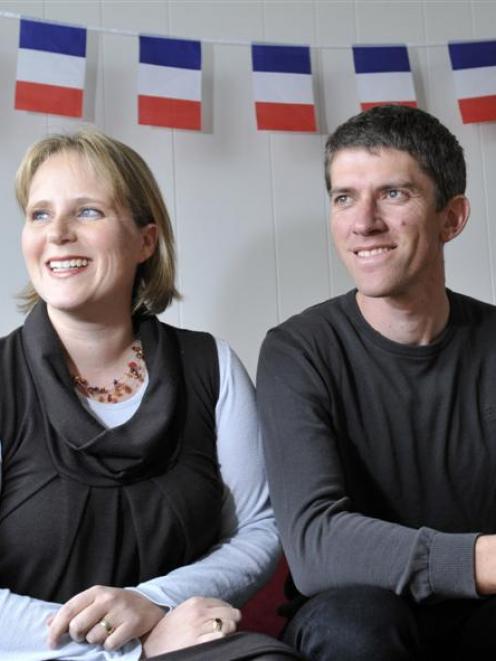 Sandrine and Yoann Feillet at Antipodes Travel's office in the Capitol Building, Princes St. Photo by Gregor Richardson.
Business is brisk for Yoann and Sandrine Feillet who operate an inbound French-speaking travel agency based in Dunedin. Established in 2004, Antipodes Travel organises custom-built itineraries for individual travellers and small groups, as Sally Rae reports.

When it came to who to support in the Rugby World Cup final, Sandrine Feillet had a bit of a dilemma.

She and her husband, Yoann, are both from France but now have New Zealand citizenship and consider themselves "Kiwis", although they spend time each year in both countries.

Mrs Feillet believed the All Blacks deserved to win, but was happy if the French emerged victors "because I think I'm still French inside, very deep".

To further complicate matters, she was also part-Swiss so decided laughingly that she could have been neutral.

Regardless of the outcome, Mrs Feillet said the tournament had put New Zealand "on the map" and she believed that more people would visit because of the World Cup.

They began fielding inquiries about the Rugby World Cup more than two years ago and ended up with about 300 clients for the event.

Mr Feillet guided a group of 26 who spent five days in Auckland and attended the pool game between the All Blacks and France at Eden Park.

His wife was also in Auckland at the same time and managed to get a ticket to the game. It was a "dream" for most of their clients to watch it.

The French had "huge respect" for the All Blacks, even when they lost to them, Mr Feillet said.

Auckland was the city where the couple met at the Viaduct. Mr Feillet was travelling around New Zealand, while his future wife had got "fed up" with her work in Paris and wanted a change.

The young couple ended up travelling extensively throughout the South Island, including visiting Dunedin, and liked it so much they decided to return to the city to live.

The main reason to shift south was to leave a big city. Both came from rural towns in France and, while Auckland was a "great city", it was too busy at times for them, and "not real New Zealand", Mr Feillet said.

After looking at some small villages, they decided they wanted "somewhere a bit bigger but not too big" and Dunedin fitted the bill.

Mrs Feillet wanted somewhere with enough services for a family - the couple have two children, aged 2 and 4 - and to be near an airport.

"I want to have an exit to the rest of the world."

The couple had decided to divide their time between New Zealand and France, allowing their children to get to know their grandparents, and they spend about three months of the year based in Brittany.

While in France, the couple worked, which was not always easy because of the time differences. As well as dealing with clients, they could also liaise with travel agencies, along with keeping tabs on business back in New Zealand.

Such a lifestyle might sound "like Paradise" but it was definitely not a holiday, Mrs Feillet said.

Balancing the demands of a young family with a business was sometimes very hard, particularly when Mr Feillet was away taking tours.

Because she wanted to spend time with the children, often Mrs Feillet worked from home in the evenings, saying it was not like a routine "nine to five" job.

The couple, who employ five staff, acknowledged there was a problem retaining staff, who needed to be fluent in French.

Their business had not been affected by the Canterbury earthquakes or the global financial crisis. Their market tended to be more upmarket travellers and they were "doing OK", Mrs Feillet said.

The French market was one of the best now in Europe, in terms of growth, although it was difficult to pinpoint the reason for that growth.

While the couple agreed they knew little about New Zealand when they were growing up - "just the All Blacks and kiwis" Mr Feillet said - the country now was becoming more well known as a destination.

It was advertised "quite well" during the 2007 Rugby World Cup in France and that may have helped with the promotion.

In the future, the couple planned to organise more tours with specific themes, including some built around special events.

On December 9, Antipodes Travel is organising the inaugural Pacific Golf Club at Jacks Point golf course in Queenstown, bringing together players from New Zealand and the French-speaking islands.

They already organise some small weddings and would like to do more, having themselves been married on the Otago Peninsula in 2005.

While they missed family and friends in France, they were very proud now to be "Kiwis", along with their children, and they described the citizenship ceremony as an emotional occasion.

Away from work, Mrs Feillet sang every Tuesday night with the Northeast Valley choir and her husband was an enthusiast for orienteering and rogaining (the sport of long-distance cross-country navigation).