Dunedin solution for a weighty problem 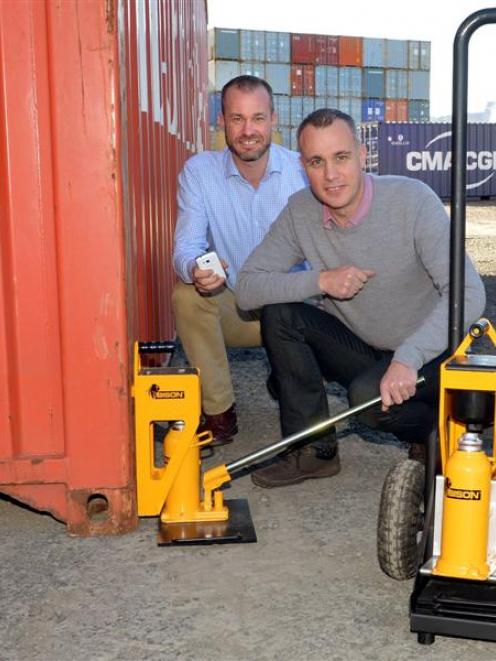 Greg (left) and Mark Fahey, from tech company Bison, with their container weighing system. Photo by Stephen Jaquiery.
A Dunedin-based tech company is looking to solve a weighty issue that has arisen globally.

From July 1 next year, exporters will be required to verify the weight of every container shipped, following major changes to international shipping rules.

Since launching last month, inquiries have been received from interested customers and distributors around the world.

The two brothers were excited about the global potential of their product, which they have patented, and described as ''quite a simple solution''.

The current system relied on shippers declaring the weight of the container but no one checked the declarations, Greg Fahey said.

It was estimated about one third of the 130 million containers shipped each year had inaccurate weights, leading to accidents, equipment breakages, dangerous vessel loading and environmental hazards.

''It's quite literally a global health and safety issue,'' he said.

Once the new rules took effect, a container would not be permitted aboard a vessel without a verified weight.

While the rules were a positive development for safety in the supply chain, they presented a new compliance obligation for shippers, he said.

The Fahey brothers saw Bison container weighing jacks as a useful solution for many operators.

The jacks were four small scales that attached to each corner of the container, lifted it slightly off the ground and weighed it.

They were synchronised with a Smartphone app and cloud database enabling the weight and other shipping data to be stored, printed and sent automatically through the logistics chain.

The jacks also confirmed the weight distribution within the container which was valuable information, as unbalanced loads were also a major problem in the industry, Mark Fahey said.

The Faheys were working on other initiatives in the container handling industry when they found out about the impending rule changes.

That led them to thinking about ways to weigh containers and, when they came up with the weighing jack, they were surprised to discover it had not been done before, Greg said.

The idea was conceived at the beginning of last year and, after seeding it themselves, they had raised some capital through Otago and Auckland angel investors.

The New Zealand Venture Investment Fund had also come in alongside the angels, and Callaghan Innovation had provided a project grant which assisted with the development of the jack.

The parts would be sourced from local suppliers and assembled in Dunedin.

The Faheys saw Bison as a tech company with a focus on container weighing. Other products would be developed as they scaled up, but, in the meantime, they were focused on getting the jack on the market.

Any local businesses needing containers weighed were encouraged to contact Bison to try out the jacks or to watch how they worked.