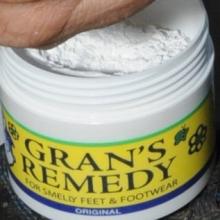 A container of Gran's remedy. Photo: ODT
Footpowder maker Gran’s Remedy has been a household name in New Zealand for decades, and now the private Dunedin-founded company has been sold to listed Ebos Group.

Gran’s Remedy is already exported to markets including China and South Korea, but Ebos is looking to gain wider exposure in Australasia, as it will join another recent Ebos acquisition, Australian company Nature’s Synergy Pty Ltd. Gran’s Remedy was established in Dunedin more than 30 years ago by friends Wayne Nicholson and Bill Galer, who were  working on the wharves at Port Chalmers.

In 2010 about 120,000 pottles were manufactured, while last year that number was getting close to 1 million.

The original recipe had been passed down the Nicholson family for generations and the "Gran’s" name came from Mr Nicholson’s grandmother.

The sale price was not disclosed yesterday. Attempts to contact some of the original Dunedin shareholders  were unsuccessful.

Initially, the powder  for smelly feet was mixed in sterilised concrete-mixers in Dunedin, before production moved  to Auckland in the early 2000s.

"What’s great about this product is that it works," he said.

Gran’s Remedy would be targeted for expansion in Australia and wider Southeast Asia beyond China and South Korea, he said.

He believed Gran’s Remedy could also have an industrial application, in boots and safety gloves for construction and factory employees. Manufacturing would remain in South Auckland. Gran’s Remedy would bolster Endeavour’s business portfolio, which already included brands such as Red Seal and Nature’s Kiss Anti-Flamme, he said.

The main active ingredient of the original recipe was zinc undecylenate, along with potassium aluminium sulphate, talcum powder and zinc oxide. Manuka oil and kawakawa were added later.