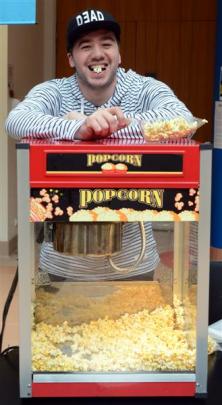 University of Otago student Geordi Dearns hands out popcorn during the Be Your Own Boss Expo in Dunedin yesterday. Photo by Gerard O'Brien.

When it came to recruiting students at yesterday's Be Your Own Boss Expo in Dunedin, Geordi Dearns had a corny idea.

Mr Dearns (21), who was seeking expressions of interest to form an entrepreneurs' club for students at both the University of Otago and Otago Polytechnic, was handing out popcorn to those attending the expo.

Although some were interested only in the popcorn, it gave him an opportunity to talk to students and he was delighted by the response, with about 50 expressions of interest registered within a short period.

A lot of the entrepreneurship scene in Dunedin was aimed at commerce students, which was ''rightly so'', but he wanted to get students who were studying other disciplines involved as well.

He was still working on the club's structure and it might meet monthly and involve businesses and other people interested in helping the students.

He was eager to hear from any individuals or organisations keen to help out.

The aim was to network, generate some innovative ideas, help students make the ''next move'' in starting their business and ''to progress Dunedin as a whole'', he said.

Mr Dearns, who is completing a double major in management and marketing, said he was passionate about Otago.

He has been involved with several of his own ventures, including making web and mobile apps with a group of other Otago university students.

Both the Audacious business challenge and the university's school of commerce had been very helpful and he thought the expo was an excellent initiative.

''In my own personal student opinion, if we didn't have these kinds of things, you wouldn't know where to start looking, unless you're a commerce student.''

The expo, held at the University of Otago, was aimed at tertiary students interested in starting their own business.

One of the organisers, Kate Turnbull, was pleased with the success of the inaugural event.

Although it was hard to estimate numbers, given it was held in the atrium of the commerce building, which was a large space, she estimated about ''150 or so'' attended the four workshops, while about 200 people were at the expo throughout the day.

She was keen for it to become a regular event and already had ideas on how to tweak it and ''make it bigger and better'' and get more students along next year.