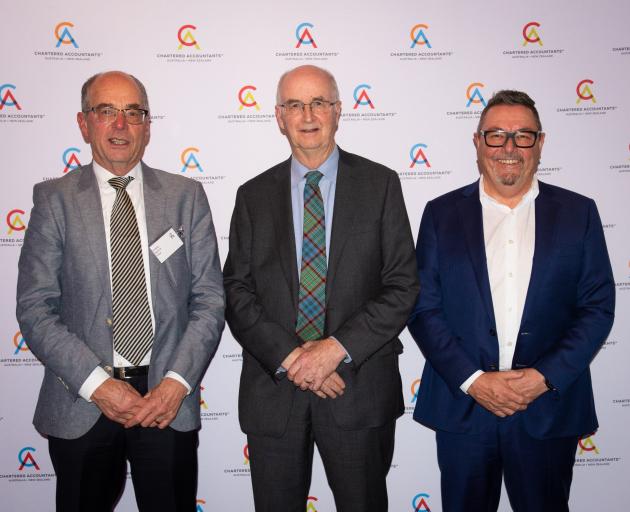 PKF Dunedin senior consultant Lindsay Dey (left), of Dunedin, A J McKenzie principal Alan McKenzie, of Dunedin, and Findex senior partner Paul Moodie, of Wanaka, at the Chartered Accountants’ gala dinner in Dunedin earlier this week. PHOTO: SUPPLIED
Between the three of them, they have about 117 years experience in accountancy.

The award is designed to recognise contributions to the accounting profession through services to the community, participation in professional bodies and dedication to research and writing within the accounting field.

The Otago trio were presented with their fellowships at a gala dinner in Dunedin on Wednesday night.

After graduating from the University of Otago in 1973, Mr McKenzie qualified as a chartered accountant in 1976 while working for an accountancy firm in South Africa.

Receiving the fellowship was a "huge honour", especially being recognised by his peers.

There were fantastic opportunities in accountancy and Mr McKenzie encouraged any young people considering the profession to give it a go.

Chartered accountancy is a family thing for Lindsay Dey — three generations of his family are part of the profession.

He began his career at Lawrence Anderson Buddle, now Polson Higgs, in 1980.

In 1995, he started Impact Consulting & Accounting, which merged with PKF Dunedin in 2017.

"It is really nice to be recognised," Mr Dey said.

Mr Moodie started with Crowe Horwath New Zealand in 1993, which eventually became Findex in 2019 where he is now a senior partner.

He only stepped down as a trustee of the Otago Rescue Helicopter Trust about three years ago.

Being made a fellow was an "incredible privilege", Mr Moodie said.