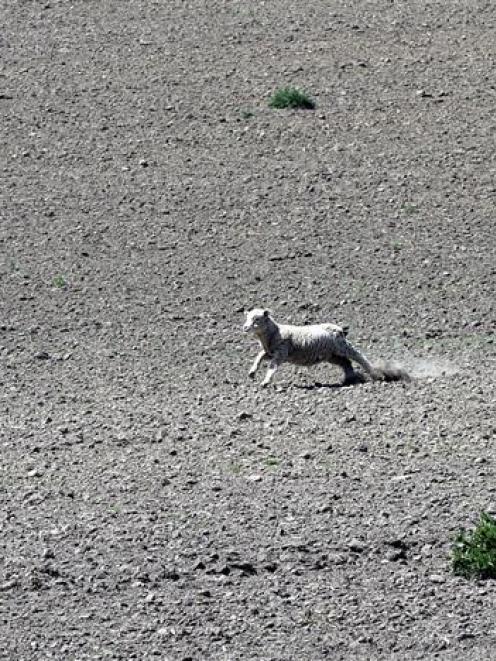 Farmers impacted by dry conditions are urged to keep an eye on neighbours and to seek help if they need it. Photo by Peter McIntosh.
Coping with dry conditions on Otago farms and the ongoing implications is about taking action, as agribusiness reporter Sally Rae reports.

Mrs Macaulay, of North Taieri, knows first-hand exactly what it feels like, having farmed in the Strath Taieri where drought was a regular occurrence.

She also knows about the ongoing implications of such an adverse event.‘‘Weeks and months of drought is soul-destroy-ing. It's not easy to live with,'' Mrs Macaulay said.

Parts of Otago, along with Marlborough and Canterbury, have had their medium-scale adverse event drought classification extended until the end of June.

Rain in January was a ‘‘real godsend'' in some areas but it was also said, at that time, that it had not ‘‘put the drought to bed''.

With no rain this month and very hot weather, the consensus in places like the Strath Taieri was that ‘‘people are starting to shake their heads again'', she said.

It was an extremely worrying situation, particularly given the state of the dairy industry and with declining lamb prices. Some farmers had commented that their lamb income would be halved this year.

Farmers needed to be talking to and working closely with their rural professionals, as well as reviewing cash flows, she said.

They needed to be proactive and think how they were going to go forward. Drought was much different from other adverse events like floods or snowstorms and the implications remained for a long time.

Mrs Macaulay also urged farmers to keep an eye on their neighbours and, if they had not seen them for a day or two, she encouraged ‘‘a friendly chat''.‘‘It's neighbour looking after neighbour,'' she said.

Demand for the trust's services was steady and every farming situation was different. The service was confidential and all calls to the freephone number were answered locally.

Other farmers spoken to agreed that drought involved a complex matrix of trigger points. It was not dramatic, like flooding or a snow event.

‘‘There's no adrenaline, no excitement with it. It happens over time. It's not something people can jump in cars in town and say, ‘I'll help'.

‘‘It's very much your decisions in that matrix and the onus is on you,'' one sheep and beef farmer said.

This year had been a perfect storm of dry weather and market conditions, making it challenging for both dairy farmers and their sheep and beef counterparts.

For North Otago sheep and beef farmer Jenny Malcolm, coping with dry conditions was about taking action. It was also about monitoring to give information; information was power, provided it was used, but it had to have a purpose, she said.

A model she regularly used, after learning about it from a valuable series of seminars run by the Agri-Women's Development Trust, was about taking ownership, accountability and responsibility, rather than using blame, excuses and denial, the latter mindset often causing immobilisation.

Those choosing the mindset of the former bracket were more likely to be successful - ‘‘because they're forward thinking rather than ‘woe is me'.''

‘‘So when you hear yourself making excuses, or blaming someone for something, switch it around and ask ‘how can I take this forward?','' she said.

Alarm bells started to ring back on the Malcolm farm in 2014 when rainfall was substantially lower than normal; that included 20% of their average rainfall in August, half in October and November, and one-third in December.

That year, Mrs Malcolm and her husband Bill took early action and weaned their lambs two to three weeks earlier than usual which, at the time, felt like drastic action and a brave move.

As the dry conditions continued, they did the sums on what it would cost them to buy palm kernel extract (PKE), as skinny ewes would translate to low scanning percentages and, subsequently, low lambing percentages. Alternatively, they could have bought the likes of barley or silage.

The decision was focused on trying to confine the drought to the current season, and trying to ensure the next season was at least set up for a good year.

By investing $40,000 on PKE, they calculated they had to produce another 400 lambs to pay for it, compared with doing nothing. It paid off when they achieved scanning of 208%, instead of 176%. The ewes lambed fat, milked well and both lamb survival and lamb growth rates were high.

So their investment not only gave them more lambs, but it meant they could wean earlier in spring 2015 and be confident they could screw the ewes down to maintenance and hold their weight, while also ensuring their lambs were going to be ‘‘pretty good'' despite making another decision to wean a month earlier than usual when drought conditions deepened.

It was about having the confidence to see it as an investment, not a cost. It also needed to be considered what the impacts would be if they were to do nothing, Mrs Malcolm said.

There were also wider implications; more grass cover through the use of feeding supplementary feed and feeding PKE to bulls, which did well on it, combined with fodder beet.

Feed could be prioritised, with lambs in priority mobs with those giving the best returns getting the most priority.

Lambs got the best quality pasture, while ewes were doing the hard work and following behind ‘‘cleaning everything up''.

The drought might not yet be over so they were now ensuring their ewes were in top condition again.‘‘While we are enjoying a period of good growth since Christmas, the subsoil is still very dry,'' she said.

Sharyn Price said failing to take action was actually making a decision to hope the situation improved by itself. That often made things worse and a farmer who acted sooner had many more options than one who waited until their position was serious.

Mrs Price and her husband Julian specialise in ultra-high sheep performance on their Kauru Hill property.

They monitored rainfall and pasture cover and took personal responsibility for their decisions. Everything possible was done to ensure they were ready for when it did rain.‘‘One thing we do, we regard ourselves as dryland specialists - not victims,'' she said. But it was not ‘‘do as I do''; every situation was different, she stressed.

A Ministry for Primary Industry adverse events spokeswoman said those who planned early and kept informed had experiences that others could learn from.

Some farmers required recovery assistance and there were measures in place. People were urged to talk to their financial advisers, accountants and Rural Support Trusts, or their GPs, if necessary.